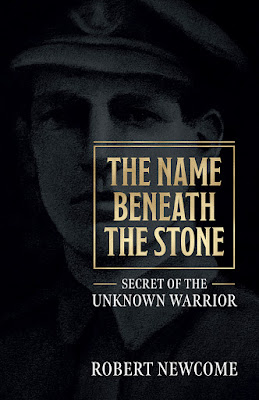 An honour to be the stop today on the Blog Tour for the wonderful THE NAME BENEATH THE STONE by Robert Newcome. My thanks to the author, publisher and Bookollective for putting the tour together and letting me be part of it all.

Three generations, one family, connected by an historic secret. 1917 Private Daniel Dawkins fights at Messines Ridge and Passchendaele. He writes home to his true-love Joyce, but reveals little of his extreme bravery, his kindness, his loyalty to his comrades and the horrors they experience on the Western Front.

1920 Captain Peter Harding is tasked with a secret mission to assist in the selection of a body dug up from the battlefields of Flanders to be buried in Westminster Abbey as the 'Unknown Warrior'. Events take place on that expedition that come to haunt him for the rest of his life.

2011 Sarah Harding discovers Daniel s letters and Peter s diaries. Together with historian James Marchant she pieces together the hidden truth behind the Tomb of the Unknown Warrior and must decide what to do with it. Values are challenged and characters are tested in this gripping novel which asks what if the identity of the Unknown Soldier was discovered - and should that secret ever be revealed?

I think it's books like these that show you just how important it is to keep the stories of the bravery and sacrifice that many made in times of war, and I found myself totally absorbed by this story and all the many layers and timelines it encompasses.

Set over 3 timelines, each chapter of the story is brilliantly told as a work of fiction based on fact.  In the later timeline, 2011, we have Sarah Harding who is nursing her father has he approaches the end of his life and she uncovers many letters in his possession from his time in the war and they start a chain of research and discovery off as she wishes to find out more about the past and her family link to the story of the unknown soldier.

The timelines also go back to 1917 and 1920 - in 1917 Daniel Dawkins shares his thoughts on all he has seen on the front line and the tragedies he was close to.  The banter that the soldiers shared - men and boys who came from normal backgrounds who were thrown into extraordinary circumstances, and I really loved these moments in the story.  It took you right back to try and gain a little understanding of just how they made sense of what they were witnessing and what they were being expected to do by those in charge. How the different personalities amongst them all dealt with the many horrific sights they came face to face with, and how they tried to help those struggling.

And then the 1920 storyline was that of the Unknown Soldier. How it was thought that bringing home a body from France to bury at Westminster could unite the country and those grieving their lost loved ones.  So many different emotions spring to mind when you think of those lost, and those who are at home not knowing where their loved ones are buried. And to those involved in choosing and transporting this unknown soldier back to the UK as well.

As Sarah starts to put all the pieces together of this astonishing family drama, it became a book that I found it difficult to put down.  There were so many threads to follow that each had so much intrigue that you could easily have had a book written just about each timeline!

What I loved was the human aspect of the storyline.  When we read about history we see the numbers and the cold hard facts, but this kind of book gives you a glimpse behind the scenes - the kind of people involved, how those left at home dealt with not knowing or hearing reports on the radio or in papers, the decisions that had to be made on the frontline and just how they even managed to keep going when they were faced with impossible missions and they're constantly losing their friends and colleagues but they had to keep on fighting.

This was an enthralling and emotional book and one I'm very glad to have had the pleasure of reading. Alongside the 'fiction' element, there's also a clever use throughout the book of newspaper articles of the time, telegrams from the King and all the goings on behind the scene which helped give more depth and perspective to the news that was filtering back to those in the UK.

YouTube footage of the 1920 funeral of the Unknown Soldier 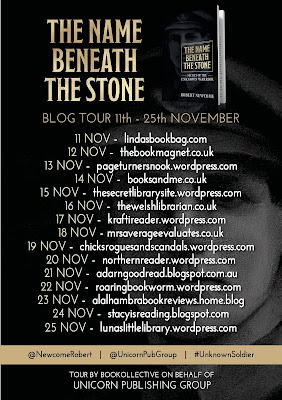