#BookReview ALL MY FRIENDS ARE SUPERHEROES by ANDREW KAUFMAN 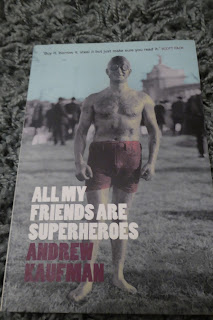 All Tom's friends really are superheroes.There's the Ear, the Spooner, the Impossible Man. Tom even married a superhero, the Perfectionist. But at their wedding, the Perfectionist was hypnotized (by ex-boyfriend Hypno, of course) to believe that Tom is invisible. Nothing he does can make her see him. Six months later, she's sure that Tom has abandoned her.So she's moving to Vancouver. She'll use her superpower to make Vancouver perfect and leave all the heartbreak in Toronto. With no idea Tom's beside her, she boards an airplane in Toronto. Tom has until the wheels touch the ground in Vancouver to convince her he's visible, or he loses her forever.

This was such a clever, fun and quirky little read that I raced through and will happily be re-reading for many years to come!

It's a insightful love story - with added superhero elements!! The main protagonist finds himself invisible to his wife, 'the perfectionist'. This happened just after they married and she finds herself moving to Vancouver desperate to start her life again, while he's on the same plane determined to make her see him again.

I loved the way this was written - the fact that each of us have our own superpower, there are many I could identify with in this book too, and how that makes us unique in our own special way! It really captures the fact that we start to take people for granted and miss the little things that drew us to them in the first place. The author also includes some very perceptive descriptions of other superheroes amongst us and I found myself smiling on many occasions at just how relatable everything was.

Both perspectives were extremely precise and telling and I was amazed at just how much story was put into such a small book! It puts the emphasis on the things that make you 'you' and how they can appear to be so extraordinary and how we can often lose sight of the little traits we all possess. It is silly and surreal but touching too!
★★★★★