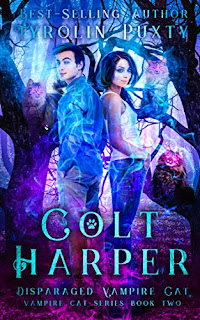 Colt Harper, now stinking of humanity, has lost his esteemed title and is doomed to wander the earth with his fugitive...ugh, ‘friends’.

Travelling through various realms in an attempt to earn back his title, Colt meets his maker, the dreaded council and an old friend he assumed was dead.

Having loved the first book in this series - Colt Harper - Esteemed Vampire Cat - I've been eagerly awaiting book two and it's just wonderful to have this character back in my life..... even if he's a little different now! That struggle is real for Colt as he comes to terms with having 'emotions' and 'feelings'! His normal cynicism and snark has been replaced by a reluctant compassion and he hates himself for it!

In this story he's reunited with some favourite characters from the first book - the tickle monster is back! - and he's dealing with seeking his own revenge, while being hunted himself by a supernatural 'being' and this allows an adventure of sorts to new dimensions, alongside dimensions from other books written by Tyrolin Puxty!

What I love most about these books are the humour - it's less in your face here than the previous book, but it's brilliantly subtle and allows for so many different aspects to be explored, and there's a never ending supply of quirks and curve balls littered throughout that had me in stitches!

Having Colt so conflicted as a character really made this book for me!  Helping people is not his normal 'thing' but with his new human emotions, he takes to responsibility with aplomb - even if he doesn't really know what he's doing half the time!

There are so many brilliant one liners -  "I'm a tickler, not a fighter" ( I want this put on a t-shirt!!) and a cliff hanger that left me shocked and desperate for more, so I'm just hoping Colt will be returning soon and wonder what complications are set to face him next time!!
★★★★★