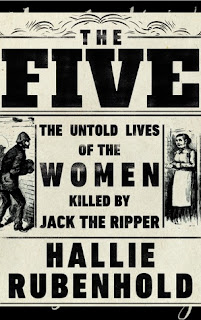 Five devastating human stories and a dark and moving portrait of Victorian London—the untold lives of the women killed by Jack the Ripper.Polly, Annie, Elizabeth, Catherine and Mary-Jane are famous for the same thing, though they never met. They came from Fleet Street, Knightsbridge, Wolverhampton, Sweden, and Wales. They wrote ballads, ran coffee houses, lived on country estates, they breathed ink-dust from printing presses and escaped people-traffickers.What they had in common was the year of their murders: 1888. The person responsible was never identified, but the character created by the press to fill that gap has become far more famous than any of these five women.For more than a century, newspapers have been keen to tell us that "the Ripper" preyed on prostitutes. Not only is this untrue, as historian Hallie Rubenhold has discovered, it has prevented the real stories of these fascinating women from being told. Now, in this devastating narrative of five lives, Rubenhold finally sets the record straight, revealing a world not just of Dickens and Queen Victoria, but of poverty, homelessness and rampant misogyny. They died because they were in the wrong place at the wrong time—but their greatest misfortune was to be born a woman.

Polly, Annie, Elizabeth, Catherine, Mary Jane. Names we should all know considering their place in crime history, but many of us don't as more focus is placed on the perpetrator of the crimes against them than the actual victims. But in this staggering work, the author has set about redressing the balance so we can get to know more about the women who were brutally murdered in London in 1888 by Jack the Ripper.

The attention to detail throughout is staggering and I can only begin to imagine how long it must have taken the author to put this work together. Each woman is given their own section so that their story can be fully told through painstaking research into family trees, newspaper reports and police statements from family and friends, and it just makes for such absorbing reading. It gives you a real glimpse into life in those times, the bleakness, the struggles and the human side of these women who were dealt a rough hand throughout their lives, only for them to be ended in such horrific ways, and then their characters talked down after their deaths.

But this book gives these women a voice, so we learn of their upbringings, the family history and they all came from different backgrounds so there's so many interesting things to learn about life in the past - the attitudes of society, the family dynamics and the devastating effects of addiction are brought to the front and your heart just bled for these women. However they tried to improve their circumstances, there was always something just around the corner to bring them down once more.

What I also found most profound was the list at the end of the book which was which items the women had on them at the time of their murders. Very poignant and really hit home of just how tragic their lives were.

Mixed in with the local news at the time, the good(well known) and the bad (much less reported!), this book does a magnificent job of transporting the reader back in time and I found it truly astonishing and enthralling. A must read and one of my books of 2019!