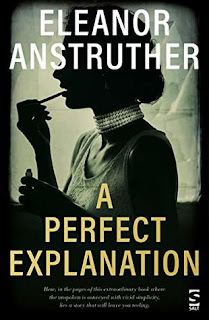 The Observer: Fiction to look out for in 2019
Exploring themes of ownership and abandonment, Eleanor Anstruther’s debut is a fictionalised account of the true story of Enid Campbell (1892–1964), granddaughter of the 8th Duke of Argyll.
Interweaving one significant day in 1964 with a decade during the interwar period, A Perfect Explanation gets to the heart of what it is to be bound by gender, heritage and tradition, to fight, to lose, to fight again. In a world of privilege, truth remains the same; there are no heroes and villains, only people misunderstood. Here, in the pages of this extraordinary book where the unspoken is conveyed with vivid simplicity, lies a story that will leave you reeling.

This is a book based on the author's own grandmother, and wow what a story! I listened to the audio version, alongside reading the paperback, and found it to be utterly compelling - it's heartbreaking, tragic and left me feeling torn as to who to side with as each story was revealed over different timelines. It just goes to show how messy families can be, especially when there's money and standing to be thought of.The art of compassion and understanding seemed to be long forgotten by many of the characters as they faced really troubling times, and the least of their worries seemed to be the concern for the children involved. They became a by product of the battle of wills between some very powerful individuals who were dealing with their own emotional turmoil, but had very little support to get through it.The story is told from a couple of perspectives over the timelines and I found this such a brilliant way of seeing the story evolve - from Enid being in a home feeling so bitter towards life awaiting a visit from her daughter, to Enid looking back to her past as she dealt with her own less than compassionate family and how that affected her in how she dealt with wedded life and motherhood. They say what we see shapes, and this is clearly demonstrated in this book.And at the heart of the story are the children, especially poor Fagus who had medical issues but nobody knew how to deal with him and he had such a tragic life with little care. The anger and resentment from his brother and sister too who were also pushed aside by those they trusted was clearly felt too and brilliantly portrayed throughout. Their indifference to their mother in her later life was understandable but you could just see history repeating itself over and over.I had so many mixed emotions towards Enid - she had such a sad life surrounded by people who clearly didn't understand her post natal depression, and was expected to live a life she just didn't want for the sake of the family. It was a brilliant portrayal of family dynamics, the mother/daughter relationships and a real battle of wills with nobody seemingly prepared to be more understanding towards one another and do the best for the children.The audio version was a wonderful listen - beautifully narrated and brought the characters to life perfectly.