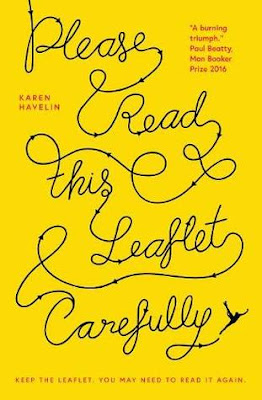 Please Read This Leaflet Carefully, the debut novel from Norwegian writer and translator Karen Havelin, is the story of a woman whose body has become her enemy.

The novel tracks backward, from 2016 until 1995, etching details of daily life into a gripping and darkly humorous bildungsroman, about the intricacies of love and life in a fragile body.

We meet Laura Fjellstad first as she works and cares for her young daughter, while struggling with debilitating pain and endometriosis, an invisible chronic illness.

As the reader moves in reverse to meet Laura’s younger and somewhat healthier selves (a hopeful bride in New York, a baby queer in Paris, a figure skater in Norway) we uncover her tireless work to gain control of her identity, her illness and the conflicting demands made by doctors, friends, lovers and family.

Man Booker Prize-winning author Paul Beatty says most books about disease try to describe the pain; told in poetic whisper, Karen Havelin's debut novel lets pain speak for itself. It's a book that dares you be nosy, to eavesdrop and listen in to a stoic young woman whom no one noticed until she began to disappear, her body disintegrating from the inside out until there's nothing left but searing agony and almost impossibly―a burning triumph.

Jarringly funny and perceptive; an intimate reckoning with the inner demons and precarity of everyday life, unpacked through the very specific lens of a woman with chronic pain.

A beautiful and brutal story of life with a chronic illness, that really connected with me as it just felt so honest and insightful and having a chronic illness myself I just felt so much empathy and it just struck a chord with me that I shared many of her thoughts and feelings. It's also told in a really intriguing way - it's told from back to front so we go backwards in time so you see the impact on various times in the life of Laura. From where she is now right back to her childhood and how each stage of the illness - endometriosis - has impacted on her everyday life, her interactions with family and friends, and her attitude to the illness over the years.

We start in 2016 and she's living in New York with her daughter - trying to live a normal life despite the restrictions that a chronic illness place upon you as a person. She's newly divorced and exhausted, with her parents living in Norway, but she's reluctant to take any help from anyone as she's determined she doesn't need the help of anyone. It's a stubborness that seems to plague her throughout - she doesn't want the pity of people and finds it easier to push herself to prove a point, despite knowing that pushing will have a negative effect on her health. And then the story goes backwards in years so you see her at different times in her life, with different views and outlooks on just how the illness is impacting on her and those around her. From moving to another country, to getting married and having a child, and to being back in Norway planning a new life, almost in a way to escape the 'old her' and to prove that she can do things on her own, no matter how hard.

She finds astonishing prejudice throughout, especially suffering an invisible illness, so people think she looks ok but are unable to see the pain she's suffering on a daily basis, and just how exhausting the tiniest task can be. Things a 'healthy' person takes for granted. How she becomes aware of the signs when she's pushing too hard and knowing when to stop and rest. And also recognising the importance of being kind to yourself and those around you. As well as her family issues, it also touches on sexuality and finding yourself.

This book really captures brilliantly all the conflicting feelings that you have with a chronic illness - dealing with the extremely bad days, finding hope in the good days, the well meaning advice you get, the anger, the frustrations and the resilience you build up to coping with things on your own as you don't want to burden others. I found it fascinating to see how the mindset of Laura changed over the years with the last chapters especially being so poignant, with her in her childhood and the hopes and dreams she had for the future.

A stunning and powerful novel that I can highly recommend, especially to anyone dealing with a chronic illness or people who just want a better understanding of invisible illnesses as this sums it all up perfectly.