#BookReview THE WAY TO THE SEA by CAROLINE CRAMPTON #NonFictionNovember 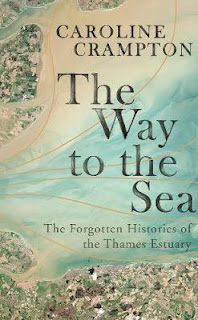 Caroline Crampton was born on the Thames Estuary to parents who had sailed there from South Africa in the early 1980s. Having grown up with seafaring legs and a desire to explore, Caroline is both a knowledgeable guide to the most hidden-away parts of this overlooked and unfashionable part of the country, and a persuasive advocate for its significance, both historically and culturally. As one of the key entrances and exits to England, the estuary has been pivotal to London's economic fortunes and in defining its place in the world. It has also been the entry point for immigrants for generations, yet it has an ambivalent relationship with newcomers, and UKIP's popularity in the area is on the rise. As Caroline navigates the waters of the estuary, she also seeks out its stories: empty warehouses and arsenals; the Thames barrier, which guards the safety of Londoners more precariously than we might; ship wrecks still inhabited by the ghosts of the drowned; vast Victorian pumping stations which continue to carry away the capital's sewage; the river banks, layered with archaeological Anglo-Saxon treasures; literature inspired by its landscape; beacons used for centuries to guide boats through the dark and murky waterways of the estuary; the eerie Maunsell army forts - 24 metre high towers of concrete and steel which were built on concealed sandbanks at the far reaches of the estuary during the Second World War and designed to spot (and shoot) at incoming enemy planes; and the estuary's wildlife and shifting tidal moods.

As someone who lives alongside the Thames Estuary, I found this to be a fascinating mix of memoir and history of the Thames from Caroline as she looks back to her first memories of the Thames with her parents, and how it has changed as she travels back along the Thames from the source to the open sea. And there's huge differences in the River from one end to the other so it's really interesting to hear her thoughts as she sees the landscape change around her on her journey.And amongst her own personal recollections of time spent along, and in!, the Thames there are also clever uses of how the Thames has been recorded and used in history, literature, art and photography which gives you another look at how important a role that the Thames has played over the years, and continues to do so but in a rather different way now than before.As a local to the Thames I found it fascinating to learn so much more about places and points along the river that I thought I knew so well! I understand the pull of the Thames so I really connected with the author and her 'obsession' with the water and the places along it. From the animal life to the diseases and disasters that have plagued this stretch of water, I found this book to be really entertaining and informative.