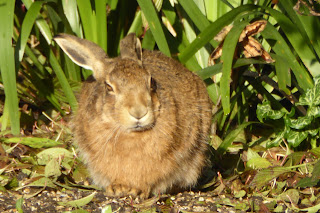 Sunshine has returned!!  It's been such a miserable grey week that I was very happy, as was this hare!, to see blue skies again!

And with the grey skies, my reading has slowed right down! I've been a little side tracked with some xstitch projects so that's eaten into my reading time, although has allowed me to listen to audiobooks again!  So just 3 books finished this week, no visits to Netgalley and just a couple of books in the post!

All My Friends Are Superheroes by Andrew Kaufman - 5 stars


Woman On The Edge by Samantha M.Bailey
copy won via Twitter giveaway

A moment on the platform changes two lives forever. But nothing is as it seems...'Take my baby.'In a split second, Morgan's life changes forever. A stranger hands her a baby, then jumps in front of a train.Morgan has never seen the woman before and she can't understand what would cause a person to give away her child and take her own life.When the police question Morgan, she discovers none of the witnesses can corroborate her version of events. And when they learn Morgan longs for a baby of her own, she becomes a suspect.To prove her innocence, Morgan frantically tries to retrace the last days of the woman's life. She begins to understand that Nicole Markham believed she and her baby were in danger. Now Morgan might be in danger, too.Was Nicole a new mother struggling with paranoia?Or was something much darker going on?Pulse-pounding, heartrending, shocking, thrilling. This is one book you won't be able to stop thinking about.

'Fast, twisty and totally unexpected. A riveting read' Shari Lapena, author of The Couple Next DoorNothing is as it seems in this gripping and unputdownable thriller. Fans of The Wife Between Us and Need to Know will devour Framed by S. L. McInnis. But you won't see the twists coming...It was all fine until she turned up...Music teacher Beth and film producer Jay seem to have the perfect life together in LA.When Cassie - Beth's old best friend and college wild child - turns up unexpectedly, everything changes.But what neither of them know is what Cassie is running from. And that it's going to have consequences for them all.Something is about to go very wrong. And someone is going to lie about it.

listening to the audio book of this , narrated by Tim Robbins and his voice is wonderful!!

Guy Montag is a fireman. In his world, where television rules and literature is on the brink of extinction, firemen start fires rather than put them out. His job is to destroy the most illegal of commodities, the printed book, along with the houses in which they are hidden.Montag never questions the destruction and ruin his actions produce, returning each day to his bland life and wife, Mildred, who spends all day with her television 'family'. But then he meets an eccentric young neighbor, Clarisse, who introduces him to a past where people did not live in fear and to a present where one sees the world through the ideas in books instead of the mindless chatter of television.When Mildred attempts suicide and Clarisse suddenly disappears, Montag begins to question everything he has ever known