It's with great delight that I'm part of the Blog Tour today for HANUKKAH AT THE GREAT GREENWICH ICE CREAMERY by SHARON IBBOTSON. My thanks to the author and Rachel of Rachel's Random Resources for putting the tour together and letting me be part of it all! 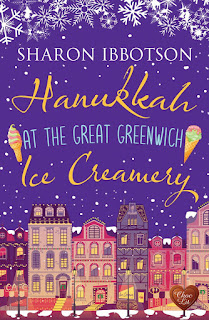 Hanukkah days, Christmas nights and strawberry ice cream …Cohen Ford is a man who could do with a little bit of sweetening up. It’s no surprise that when he walks into The Great Greenwich Ice Creamery on a typically gloomy London day before Christmas, he insists on a black coffee rather than his childhood favourite – strawberry ice cream.
But then he meets River de Luca, the woman behind the flavours. After their first encounter, Cohen begins visiting the ice creamery every Tuesday, gradually learning more about the intriguing River. Could her influence encourage cynical Cohen to become the man who embraces Christmas, Hanukkah and even strawberry ice cream?

Sharon was born in Sydney, Australia but now lives in London with her husband, two small children and two black cats named for desserts. She started writing ‘Buffy the Vampire Slayer’ fanfiction aged 15, which eventually transformed into the historical romance novels she writes today. She has two novels published by Choc Lit, and when not writing, can be found baking cakes badly or drinking wine well.

A delicious romantic treat of a read!!  And told from the male point of view which was just a wonderful twist and added so much to a touching story - and has left me craving ice cream more than ever!!

Cohen is an American working in London. His mother has asked him to deliver a present to an old friend, so he visits her at the Ice Cream shop and immediately becomes captivated by the mysterious River who he meets there.  She's not like any woman he's ever met before and it's going to take something special to win her over as he has to find a different way to communicate with her as she's deaf.  Her deafness has never stopped her living life, but has left her mother very over protective of her as she's been hurt in the past, so she's not too impressed by Cohen when she finds out he's been visiting the shop every Tuesday just to spend time with River.

Cohen has suffered heartbreak in the past, his wife has left him and is looking to take him to the cleaners and he never has really had a deep connection with a woman. It's all been superficial to him - his life revolves around work so he's always been keen to show off his wealth, and that attracts a certain kind of woman!  And that is the total opposite to River who is a wonderful soul and she gets him to open up in ways he's never done before.  She's better than any of the highly paid therapists he's had over the years in getting through to him and making him realise just what it is he wants out of life.

I found this to be such a wonderful read and was totally captivated by River and Cohen and how their connection develops.   It's a book that touches on faith, families and relationships and shows a different side to a romantic story.  How the art of listening becomes so powerful to people and words can become meaningless.

River gives Cohen a different way of thinking about his own life and I loved seeing how his whole outlook changes by experiencing life away from the focus of work and himself! I had all the feels for this book and highly recommend it!