#BookReview ESTUARY: OUT FROM LONDON TO THE SEA by RACHEL LICHTENSTEIN #LibraryLoveChallenge #NonFiction 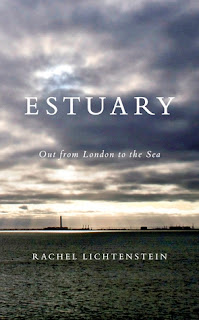 The Thames Estuary is one of the world's great deltas, providing passage in and out of London for millennia. It is silted up with the memories and artefacts of past voyages. It is the habitat for an astonishing range of wildlife. And for the people who live and work on the estuary, it is a way of life unlike any other - one most would not trade for anything, despites its dangers.

Rachel Lichtenstein has travelled the length and breadth of the estuary many times and in many vessels, from hardy tug boats to stately pleasure cruisers to an inflatable dinghy. And during these crossing she has gathered an extraordinary chorus of voices: mudlarkers and fishermen, radio pirates and champion racers, the men who risk their lives out on the water and the women who wait on the shore.

From the acclaimed author of Brick Lane and Rodinsky's Room, Estuary is a thoughtful and intimate portrait of a profoundly British place. With a clear eye and a sharp ear, Rachel Lichtenstein captures the essence of a community and an environment, examining how each has shaped and continues to shape the other.

Having lived next to the Estuary all my life, I found this to be a fascinating, illuminating and detailed look at the evolution of the Thames Estuary and all those who live by it or work on it. The folklore, the role it has played in history, the way that outsiders see Essex and how that differs from those who live there and just how much it has changed over the years.Being a local I found it so easy to feel connected to the stories told by the author, and the places she visited as she travelled along the Estuary. She stopped off in numerous places to meet people who have lived or worked on the Thames and it was so interesting to hear them share their stories. She travelled on boats and walked alongside the estuary and that really helped her give you a real flavour of estuary life. The use of black and white photos was also really clever as it didn't make the estuary out to be a glossy, colourful place as most of the time it isn't!There are more shipwrecks on the floor of the estuary per square foot than anywhere else along the UK coastline and I loved hearing the stories of those, especially of the London and the Montgomery and those who have dived down to see them. Having recently visited an exhibition of items from the London at the local museum I found these chapters to be most enlightening.It's a book I've learned so much from about the local area and found it to be brilliantly written and so absorbing to read.