#BookReview HE by JOHN CONNOLLY #LibraryLoveChallenge 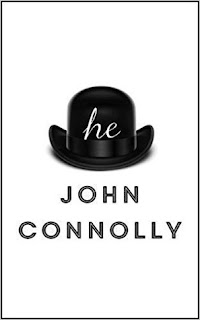 An extraordinary reimagining of the life of one of the greatest screen comedians the world has ever known: a man who knew both adoration and humiliation; who loved, and was loved in turn; who betrayed, and was betrayed; who never sought to cause pain to others, yet left a trail of affairs and broken marriages in his wake . . .
And whose life was ultimately defined by one relationship of such tenderness and devotion that only death could sever it: his partnership with the man he knew as Babe.
he is Stan Laurel.
But he did not really exist. Stan Laurel was a fiction.
With he, John Connolly recreates the golden age of Hollywood for an intensely compassionate study of the tension between commercial demands and artistic integrity, the human frailties behind even the greatest of artists, and one of the most enduring and beloved partnerships in cinema history: Laurel &Hardy.
Published by Hodder & Stoughton
PURCHASE LINKS
HIVE.CO.UK
WHSMITH
AMAZON

I've just been utterly captivated by this novel and found it to be so beautifully written and staged - the story of a bond between two men and their many ups and downs through life, while portraying the images of 'clowns' on the big screen. Laurel and Hardy films were always on TV when I was growing up and I used to love watching them, knowing very little about the men in real life and, despite this being a work of fiction, you really get a glimpse of the reality behind the fame and it definitely wasn't a bed of roses for either of them.

Seeing the story behind them both really gave you such an insight into the difficult lives they faced and the wrong decisions they often made in their own personal lives. But through it all, there was such devotion to one another which was so touching and made their 'act' so much more special.

As 'Stan Laurel' looks back over his life in his apartment he is left with many memories but many regrets and this way of looking back at how his life changed so much from coming over from England and trying to become a 'star' and how the pairing of him with Oliver Hardy 'Babe' was set to change their lives. It delves deeply into their personal lives, the way the film industry changed with the advent of talking pictures and how the studios called the shots of how 'their' actors were to lead their own lives. Little thought was given to the actors dealing with their own demons and issues by the studio bosses, it was all about how it reflected on them and about how much money it was going to make them, or cost them. A very brutal business.

I loved this inventive way of telling their story and it often broke my heart with the sadness that both men faced over the years. Yes, many issues were down to their own poor decisions and lack of fidelity, but it just showed how the image they were portraying often didn't match the reality. There was an overwhelming sadness surrounding both their lives and they never really did seem to find themselves their 'happy' despite the happiness they brought to the public with their films and appearances.

From the highs of making it as stars, to the lows of various scandals and watching their careers come to an end, I have laughed and cried throughout this book and adored every single minute.
★★★★★