#BookReview INSIDE OUT by DEMI MOORE #nonfiction #LibraryLoveChallenge 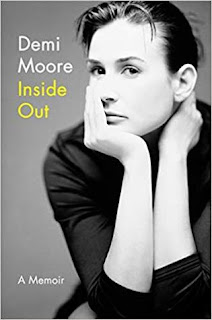 Famed American actress Demi Moore at last tells her own story in a surprisingly intimate and emotionally charged memoir.For decades, Demi Moore has been synonymous with celebrity. From iconic film roles to high-profile relationships, Moore has never been far from the spotlight—or the headlines.Even as Demi was becoming the highest paid actress in Hollywood, however, she was always outrunning her past, just one step ahead of the doubts and insecurities that defined her childhood. Throughout her rise to fame and during some of the most pivotal moments of her life, Demi battled addiction, body image issues, and childhood trauma that would follow her for years—all while juggling a skyrocketing career and at times negative public perception. As her success grew, Demi found herself questioning if she belonged in Hollywood, if she was a good mother, a good actress—and, always, if she was simply good enough.As much as her story is about adversity, it is also about tremendous resilience. In this deeply candid and reflective memoir, Demi pulls back the curtain and opens up about her career and personal life—laying bare her tumultuous relationship with her mother, her marriages, her struggles balancing stardom with raising a family, and her journey toward open heartedness. Inside Out is a story of survival, success, and surrender—a wrenchingly honest portrayal of one woman’s at once ordinary and iconic life.

This was a really fascinating insight into the life of a movie star - from a trouble and very unconventional childhood, through to dealing with fame and the stresses of family life in the public eye.

I love watching her films so to get a glimpse of the life she was living off camera was a real eye opener and she wasn't afraid to share the darker side of her life, alongside the good times, and it was so interesting to look back on her childhood and the impact that her warring parents had on her and how she never had a settled home life.

I loved reading about the 'brat pack' movies she was part of along with her marriages to Bruce Willis and Ashton Kucher, and how motherhood was the time she felt happiest and content. I never knew about the ill health she suffered as a child and how addictions really plagued her and seeing her childhood you can understand why she often sought comfort in the wrong things.

There are some great photographs as well which I always love to see in a memoir and it was fascinating to read about the good, the bad and the ugly parts of her life. Many shy away from confronting the darker times in their life but she speaks honestly about the self doubt she was plagued by and how she tried, and often failed, as a mother to bring some stability to her children despite the fact she never had that when she was growing up.

It's always nice to see behind the tabloid stories and get a different perspective on someone  in the public eye and I found this memoir refreshingly honest and quick and easy to read as well!