#BookReview THE LOST ONES by ANITA FRANK 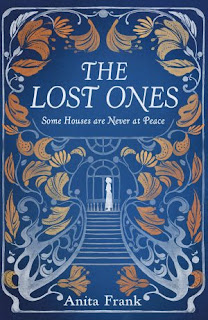 Some houses are never at peace.

Reeling from the death of her fiancé, Stella Marcham welcomes the opportunity to stay with her pregnant sister, Madeleine, at her imposing country mansion, Greyswick – but she arrives to discover a house of unease and her sister gripped by fear and suspicion.

Before long, strange incidents begin to trouble Stella – sobbing in the night, little footsteps on the stairs – and as events escalate, she finds herself drawn to the tragic history of the house.

Aided by a wounded war veteran, Stella sets about uncovering Greyswick’s dark and terrible secrets – secrets the dead whisper from the other side…

In the classic tradition of The Woman in Black, Anita Frank weaves a spell-binding debut of family tragedy, loss and redemption.

Praise for The Lost Ones

‘For fans of Henry James and Susan Hill, this chilling supernatural mystery is written in the classic mould.  Intriguing, moving and assured’  Essie Fox

‘I loved it SO MUCH – so creepy and compelling, full of atmosphere and gave me goosebumps…’   Lisa Hall

‘My coffee is stone cold. My palms are sweaty. I’ve raced to the shocking final twist of this lush, beautifully written historical novel. A gripping ghost story with an achingly poignant family mystery at its heart’ Samantha King

If you are a fan of creepy houses and ghost stories then look no further! I have found this book to be a real rollercoaster of a read, chilling and compelling, and it's left me listening out for noises when I'm in the house alone..... and thankfully I've not found any toy soldiers placed strategically in my room! Yet!!This is the story of two sisters, and Greyswick, a large country house where Stella goes to stay with her sister Madeleine , and her husband Hector, as they are both dealing with different emotional moments in their lives. Stella has just lost her fiancee in the war and the grief for her is unbearable. She sees no point in living, and if it wasn't for her maid Annie, then she wouldn't still be here. Her family seem to be of the 'snap out of it' opinion and think it's best for her to visit her sister who is currently pregnant and seemingly having a few issues of her own!Their time at Greyswick is immediately plagued by ghostly goings on! Baby cries, toy soldiers appearing in rooms, and while many in the house seem to willingly ignore what is going on, Stella and her sister are never allowed to settle and start to poke around in the history of the family and house, and enter those rooms supposedly out of bounds! What follows is a pulsating story that quickly unravels into something much darker and deeper.What captured me was the attitude of the menfolk putting it all down to hormones! Those hysterical women imagining things because they had emotional issues!! Quite shocking to us now! I do love a good ghost story and this one fits brilliantly into the genre! Using the emotions of the sisters, the history of the family and their secrets and the setting of the house to perfection!