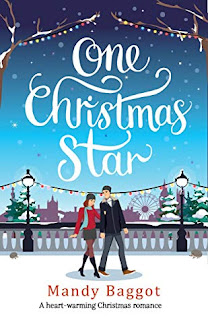 Emily Parker is set to have the worst Christmas ever!
Her flatmate's moved out, she's closed her heart to love and she's been put in charge of the school original Christmas show – with zero musical ability.
Disgraced superstar, Ray Stone is in desperate need of a quick PR turnaround. Waking up from a drunken stupor to a class of ten-year-olds snapping pics and Emily looking at him was not what he had in mind.
Ray needs Emily's help to delete the photos, and she needs his with the show. As they learn to work together they may just open their hearts to more than a second chance..

This was a lovely read for Christmas!! Full of heart, humour and a hedgehog or two! It's the story of Emily and Ray - two people brought together near Christmas and finding that there is light at the end of the tunnel!

Emily is a primary school teacher and has a real affection for all the children in her classroom and she's always going beyond the call of duty to help them, especially those who don't have the best of home lives. She's still nursing a broken heart after losing her beloved Simon a couple of years ago, and just seem stuck and unable to move on both personally and professionally.

Ray is a singer who is going through a downturn in his career! His name is being dragged through the mud in the papers and he's finding it easier to drink his way through life than to face up to the problems he's facing.

They're brought together when he's found asleep in a school shed with an injured hedgehog and becomes a source of fascination for the children! They're absolutely hilarious and some of the scenes reminded me of the film Nativity! Such innocence but no idea of boundaries when it comes to asking questions of grown ups! As Emily spends more time with him, she sees behind the image of the man in the media and sparks really fly when he helps her with the school performance!

I really enjoyed this story as it just felt so well paced and the antics of the children added a great sweetness and fun element to balance out the romance side!