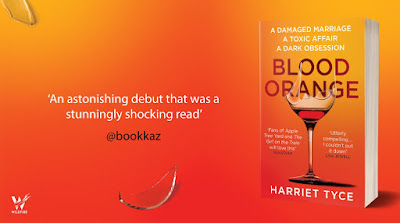 Delighted to be part of the paperback publication day celebrations for BLOOD ORANGE by HARRIET TYCE.  I'm reposting my review if this book passed you by when it was released earlier in the year - there's no excuse now not to pick up a copy!! 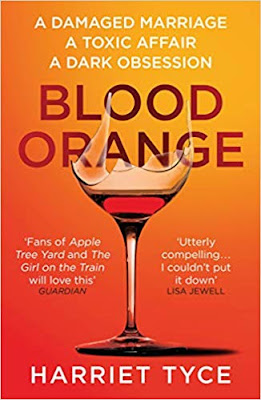 'What a twist at the end!' LISA JEWELL

Alison has it all. A doting husband, adorable daughter, and a career on the rise - she's just been given her first murder case to defend. But all is never as it seems...

Just one more night. Then I'll end it.

Alison drinks too much. She's neglecting her family. And she's having an affair with a colleague whose taste for pushing boundaries may be more than she can handle.

I did it. I killed him. I should be locked up.

Alison's client doesn't deny that she stabbed her husband - she wants to plead guilty. And yet something about her story is deeply amiss. Saving this woman may be the first step to Alison saving herself.

I'm watching you. I know what you're doing.

But someone knows Alison's secrets. Someone who wants to make her pay for what she's done, and who won't stop until she's lost everything....


'Delicious and addictive - a perfectly crafted treat!' Louise Candlish, author of Our House

'Glittering and fierce . . . a glorious bonfire of a marriage thriller' Irish Times

I found this to be a book that stays with you for days after you finish reading it! The main character - Alison - is one of those women who on paper has it all! Highly intelligent and working as a lawyer and married with a young daughter BUT still seemingly on a mission to self destruct as she lives life on the edge with a drinking problem and an addiction to affairs.This story follows her as she negotiates her first big murder case, while trying to work her way through her own problems and dealing with a boss who is in full control of their affair and uses her but she just can't seem to stay away from him.The murder case is one that strikes a chord with her - a woman who is happily married and does charity work, finds herself accused of murdering her husband in cold blood. The more Alison looks into the case you sense there is more to this than meets the eye, it's just whether Alison has enough focus to figure it out.And when Alison starts receiving sinister text messages saying 'they know what she's doing' it just ramps up the tension and intrigue into this clever story full of very flawed characters.I really loved the pace and flow of this story - it's a very dark story and some of the twists were so well crafted that I found myself gasping with each reveal! It showed just how destructive a person can be to themselves, be it through drink or sex, when they should really be enjoying their lives and being happy with what they have. At a time when she should be celebrating her success and rise in the legal world, she finds her life spiralling out of control and dealing with the consequences of her actionsAn astonishing debut that was a stunningly shocking read, and Harriet is an author I will definitely be reading more of in the future!
Posted by Books and Me! at Thursday, December 12, 2019