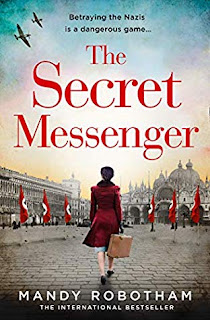 Set between German-occupied 1940s Venice and modern-day London, this is a fascinating tale of the bravery of everyday women in the darkest corners of WWII, for readers of Kate Quinn’s The Alice Network and Pam Jenoff’s The Lost Girls of Paris.
Venice, 1943
The world is at war, and Stella Jilani is leading a double life. By day she works in the lion’s den as a typist for the Reich office; by night, she risks her life as a messenger for the Italian resistance. Against all odds, Stella must impart Nazi secrets, smuggle essential supplies across the city, and produce an underground newspaper on her beloved typewriter.


But when German commander, General Breugal, becomes suspicious, it seems he will stop at nothing to find the mole, and Stella knows she faces an uncertain future…
London, 2017
Years later, grieving Luisa Belmont finds a mysterious old typewriter in her attic. Determined to find out who it belonged to, Luisa delves into the past, and uncovers a story of fierce love, unimaginable sacrifice, and, ultimately, the worst kind of betrayal…

An engrossing piece of historical fiction that really brings home the untold stories of those who lived during WWII and the brave and selfless acts that many went through to do all the could to 'fight the good fight' whilst putting themselves in danger, and the importance of sharing those stories so that future generations can understand what happened.It's a dual timeline story, so we see the story from the point of view of Luisa in London in 2017 as she is dealing with the grief of losing her mother, and sorting through all her personal possessions and finding out the significance of certain pieces she finds, especially a portable typewriter.And we see the story of Stella, in Venice in 1943, and her remarkable story of how as a young woman she is helping the resistance, whilst living and working amongst the Nazi's who have taken over Venice. She gets a role as a typist of the Reich during the day, but at night she delivers messages for the resistance and writes articles for a newspaper. Seeing her struggle with keeping her double life quiet from those around her was a real eye opener, and as a young woman her only aim is to do the right thing and keep those she loves safe. It was fascinating to see how the war affected those who lived and worked in Venice at the time - with soldiers patrolling the streets liable to ask you questions or search your belongings at everytime, so the importance of safe houses was paramount to those working to get messages out.The storyline of Stella was obviously far stronger and the more captivating, but I did like the role Luisa played in bringing things together and how the research into her family history helped distract her mind from the grief she was suffering, and that she wished she'd known more whilst her relatives were still alive. I hadn't given much thought to what it must have been like for those in Venice at the time living under Nazi rule, and there were some horrific acts that were committed on innocent people that really brought home how awful it must have been for everyone at the time. Not knowing who to trust and trying to get on normally with your day to day business, whilst fearing what was going to happen next must have taken its' toll on everyone. But Stella was always determined to keep on putting herself in danger to keep doing what she could and is a really inspirational character.An excellent historical story