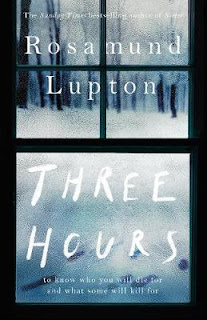 Three hours is 180 minutes or 10,800 seconds.It is a morning's lessons, a dress rehearsal of Macbeth, a snowy trek through the woods.It is an eternity waiting for news. Or a countdown to something terrible.It is 180 minutes to discover who you will die for and what men will kill for.In rural Somerset in the middle of a blizzard, the unthinkable happens: a school is under siege. Told from the point of view of the people at the heart of it, from the wounded headmaster in the library, unable to help his trapped pupils and staff, to teenage Hannah in love for the first time, to the parents gathering desperate for news, to the 16 year old Syrian refugee trying to rescue his little brother, to the police psychologist who must identify the gunmen, to the students taking refuge in the school theatre, all experience the most intense hours of their lives, where evil and terror are met by courage, love and redemption.

The subject of school shootings is always an emotive one and in this dramatic story, we get to see the horror of an active shooting at a school in the UK play out from the perspective of a variety of characters inside and out of the situation which lends itself nicely to exploring a number of issues - the heroic actions of those trying to save a life, those doing all they can to distract younger children from what is going on outside a classroom door, and the desperation of those on the outside who are trying to figure out who is behind the shooting, and the helplessness felt by the parents as they wait for news.What I liked about this book was the pace of it all - little snapshots of different situations over the three hours that gave you an overview of the scene as it played out. My only gripe was that because those inside the school were doing such a great job of staying calm to distract the children and trying to carry on as normal, it impacted on the tension for me as there were very rarely any moments where I felt they were all in danger, although that did change when it became very edgy as time ticked on and they all began to wonder how they could try and make an escape.The role of social media was also cleverly used throughout the book - the rumours and speculation all played out through the media which added to the panic created especially for those watching on outside just waiting for news. And one of the most powerful things for me was the reaction of one of the mothers' when she finds out her son is one of the shooters - the disbelief and reluctance to think of her 'little boy' as being capable of doing such a thing, which just goes to show that so much can be hidden from those closest to you.A dramatic and enjoyable read!