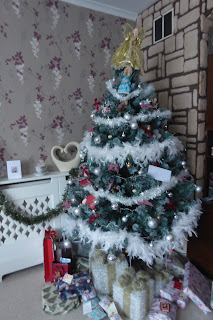 Season's Greetings to you!! We made it to Christmas!! AArrggghhh!!  And dspite he tree finally being put up, I'm still not feeling in a festive mood! Maybe the mood will hit me in the New Year!

I can tell it's Christmas though as my reading mojo has disappeared! I appear to be on a go slow! Not good when I'm trying to get ahead and start on the 2020 books - before Santa brings me a load of new books!  But I have managed to fit in 3 books this week, visited Netgalley to add 3 more to the overloaded shelves there, and even sneaked in visit to the library to bring home 2 more books!  Here's my look back..

The Sight Of You by Holly Miller - 5 stars
Out June 2020 - read via the Secret Readers app
made me sob!!

time for a look at Netgalley newbies!

Welcome to the café that never sleeps. Day and night Stella’s Café opens its doors for the lonely and the lost, the morning people and the night owls. It is many things to many people but most of all it is a place where life can wait at the door. A place of small kindnesses. A place where anyone can be whoever they want, where everyone is always welcome.Meet Hannah and Mona: best friends, waitresses, dreamers. They work at Stella’s but they dream of more, of leaving the café behind and making their own way in life.Come inside and spend twenty-four hours at Stella’s Café; a day when Hannah and Mona’s friendship will be tested, when the community will come together and when lives will be changed…

THE MERCIES by KIRAN MILLWOOD HARGRAVE
out February 2020

Finnmark, Norway, 1617. Twenty-year-old Maren Magnusdatter stands on the craggy coast, watching the sea break into a sudden and reckless storm. Forty fishermen, including her brother and father, are drowned and left broken on the rocks below. With the menfolk wiped out, the women of the tiny Arctic town of Vardø must fend for themselves.Three years later, a sinister figure arrives. Absalom Cornet comes from Scotland, where he burned witches in the northern isles. He brings with him his young Norwegian wife, Ursa, who is both heady with her husband's authority and terrified by it. In Vardø, and in Maren, Ursa sees something she has never seen before: independent women. But Absalom sees only a place untouched by God, and flooded with a mighty evil.As Maren and Ursa are drawn to one another in ways that surprise them both, the island begins to close in on them, with Absalom's iron rule threatening Vardø's very existence.Inspired by the real events of the Vardø storm and the 1621 witch trials, The Mercies is a story of love, evil, and obsession, set at the edge of civilization.

STAUNCH by ELEANOR WOOD
out March 2020

A late 30s The Wrong Knickers meets Best Exotic Marigold HotelEleanor finds herself in her late 30s on a beach in India with three old ladies, trying to ‘find herself’ and ‘discover her family history’ like some sad middle-class crisis cliché. How did she get here?Truthfully, it could be for any one of the below reasons, if not all combined:• Stepmum dying/Stepdad leaving – family falling apart, subsequent psychotic break; both parents now on third marriage• Breaking up with J after 12 years – breaking up a whole life, a whole fucking universe – for reasons that may have been… misguided?• New boyfriend moving in immediately, me insisting ‘it’s not a rebound!’ even after everyone has stopped listening, being cited in his messy divorce, him being sectioned, then breaking up with me• Going into therapy after dating a potentially violent, certainly threatening, narcissist (the most pertinent point of which should be noted: I did not break up with him – he ghosted me)How to address this situation? Take a trip to India with your octogenarian nan and two great aunts of course. The perfect, if somewhat unusual, distraction from Eleanor’s ongoing crisis.But the trip offers so much more than Eleanor could ever have hoped for.Through the vivid and worldly older women in her life, she learns what it means to be staunch in the face of true adversity. 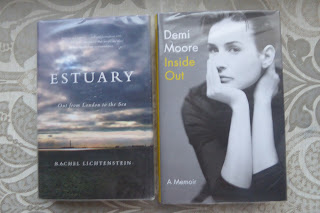 INSIDE OUT by DEMI MOORE

Famed American actress Demi Moore at last tells her own story in a surprisingly intimate and emotionally charged memoir.

For decades, Demi Moore has been synonymous with celebrity. From iconic film roles to high-profile relationships, Moore has never been far from the spotlight—or the headlines.

Even as Demi was becoming the highest paid actress in Hollywood, however, she was always outrunning her past, just one step ahead of the doubts and insecurities that defined her childhood. Throughout her rise to fame and during some of the most pivotal moments of her life, Demi battled addiction, body image issues, and childhood trauma that would follow her for years—all while juggling a skyrocketing career and at times negative public perception. As her success grew, Demi found herself questioning if she belonged in Hollywood, if she was a good mother, a good actress—and, always, if she was simply good enough.

As much as her story is about adversity, it is also about tremendous resilience. In this deeply candid and reflective memoir, Demi pulls back the curtain and opens up about her career and personal life—laying bare her tumultuous relationship with her mother, her marriages, her struggles balancing stardom with raising a family, and her journey toward open heartedness. Inside Out is a story of survival, success, and surrender—a wrenchingly honest portrayal of one woman’s at once ordinary and iconic life.

ESTUARY; OUT FROM LONDON TO THE SEA by RACHEL LICHTENSTEIN

The Thames Estuary is one of the world's great deltas, providing passage in and out of London for millennia. It is silted up with the memories and artefacts of past voyages. It is the habitat for an astonishing range of wildlife. And for the people who live and work on the estuary, it is a way of life unlike any other - one most would not trade for anything, despites its dangers.Rachel Lichtenstein has travelled the length and breadth of the estuary many times and in many vessels, from hardy tug boats to stately pleasure cruisers to an inflatable dinghy. And during these crossing she has gathered an extraordinary chorus of voices: mudlarkers and fishermen, radio pirates and champion racers, the men who risk their lives out on the water and the women who wait on the shore.From the acclaimed author of Brick Lane and Rodinsky's Room, Estuary is a thoughtful and intimate portrait of a profoundly British place. With a clear eye and a sharp ear, Rachel Lichtenstein captures the essence of a community and an environment, examining how each has shaped and continues to shape the other. 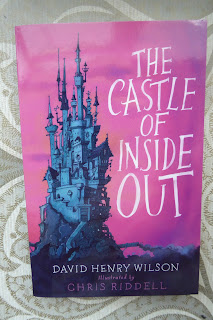 Lorina, a young schoolgirl, is led by a black rabbit through a wood to a magical land. There she finds a race of green people, who are all overworked, starving and suffering from the toxic fumes billowing out of a nearby castle. She decides to gain access to the castle for the poor green people, and within its walls she meets the "insiders", selfish creatures who hoard all the resources and treat the outsiders as slaves. Her quest leads her to encounter the bureaurat, the superviper, the farmadillo and, eventually, the awful Piggident himself.Will she be able to save the green people from the cruelty of these "insiders"?

When winter comes, man and dog are snowed in. With stocks of wine and bread depleted, they pass the time squabbling over scraps, debating who will eat the other first. Spring brings a more sinister discovery that threatens to break Adelmo Farandola's already faltering grip on reality: a man's foot poking out of the receding snow.


Wishing you all a very Merry Christmas an dhope Santa brings you lots of books!!