#BookReview THE BUS ON THURSDAY by SHIRLEY BARRETT 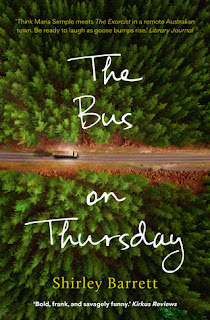 That's when I literally had thoughts of becoming a nun, because I thought, Well, I'm never going to have sex again. If I become a nun, I would at least have somewhere to live.

It wasn't just the bad break-up that caused Eleanor's life to unravel. It was the cancer. And the demons that came with it.

Freshly single and thoroughly traumatised from the ordeals of breast cancer, Eleanor Mellett starts a new job as a teacher in a remote mountain hamlet. It's certainly peaceful enough, almost too peaceful. But what's become of the previous teacher, the saintly Miss Barker, who has disappeared abruptly under mysterious circumstances? And what's with all those locks on the door? And what the hell is that bus doing idling outside her house late, late at night?

Bridget Jones meets The Exorcist in Twin Peaks. Darkly funny, deeply unsettling and surprisingly poignant, Shirley Barrett's The Bus on Thursday is a strange and wild ride for all fans of Helen Fielding, Maria Semple, David Lynch and Stephen King.

If you like your books full of dark humour and with a surreal, weird vibe, then I can't recommend this highly enough! I fell in love with Eleanor right from the off as she faces life being single and being a cancer survivor and her cynical and funny approach to life was a joy to read, especially at the beginning where I found myself laughing at her thoughts and exploits on every page! Her world just turns very dark when she finds herself in a new town as a teacher, to replace Miss Barker who has disappeared without a trace!Talbingo is the town and has a Twin Peaks kind of vibe! There's very little going on and often very few people around. The missing teacher was just the sweetest according to those who worked with her and the children who idolized her and her stickers, so living up to that is something that is proving very difficult for Eleanor to deal with. But she has wine!! She seems to be able to cope with anything when she's had a drink or three!The more she finds out about some of the children and the old teacher then the darker the story becomes! The weird stuff just keeps getting weirder and this does detract from the story a little but still makes for very entertaining but unsettling reading! In Eleanor you have a character who isn't in the most stable of places mentally or physically and is very prone to making rash decisions, and the stuff she finds herself involved with isn't helping keeping her from looking back on things that happened to her or helping her move on emotionally! And the characters around her aren't what you consider normal anyway!! Wherever you think the story might go, then you'd probably be wrong!! It was one of those books that is difficult to forget once you've finished as you can't believe some of the things that went on within the pages of this book!!