#BookReview THE FOUNDLING by STACEY HALLS 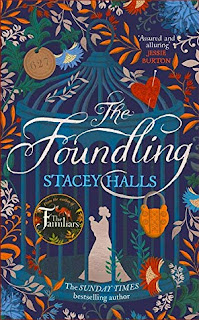 London, 1754.Six years after leaving her illegitimate daughter Clara at London's Foundling Hospital, Bess Bright returns to reclaim the child she has never known. Dreading the worst - that Clara has died in care - the last thing she expects to hear is that her daughter has already been reclaimed - by her. Her life is turned upside down as she tries to find out who has taken her little girl - and why. Less than a mile from Bess' lodgings in the city, in a quiet, gloomy townhouse on the edge of London, a young widow has not left the house in a decade. When her close friend - an ambitious young doctor at the Foundling Hospital - persuades her to hire a nursemaid for her daughter, she is hesitant to welcome someone new into her home and her life. But her past is threatening to catch up with her and tear her carefully constructed world apart.From the bestselling author of The Familiars, and set against the vibrant backdrop of Georgian London, The Foundling explores families, secrets, class, equality, power and the meaning of motherhood.

I read this via the Pigeonhole app.Another exciting piece of historical fiction from Stacey Halls who seems to really capture the essence of the time and the issues that people faced and I found it fascinating to see the story told between the haves and the have nots, in the form of Bess and Alexandra.Bess finds herself unmarried and pregnant and is forced to leave her baby daughter at The Foundling, a place where she is hoping that her daughter will be cared for while she gets her life together and then can go back and claim her. When she goes back 6 years later she finds out that Clara was taken from the hospital the day after she was left, by someone claiming to be Bess and so they mystery begins as to who that was and where her daughter is now.And the story of Alexandra is just as captivating - she's a widow who hasn't left her home for 10 years. Which means a very closeted life for her daughter who only leaves the house to go to church. Alexandra is then persuaded to get a young nursemaid in to help with the care of her daughter. You wonder what this change in her lifestyle will mean for her as she's been so careful over the years to protect her family, and she struggles to cope with a stranger in the house but her daughter seems to thrive.I loved the little flashbacks in their lives as we got to find out about their pasts that affected their present situations. And their personalities were extremely intriguing - Bess had faced so many tough times but had never given up hope, whilst Alexandra had this privilege but that didn't seem to stop her having so much anxiety about the world she was living in. At the heart of it is a young girl who just wanted people to care for her, while the women around her seemed to put their own feelings first instead of thinking of her wellbeing which they often lost sight of as they became so wrapped up in doing what felt right to them.A story full of emotion and one I raced through desperate to find out how it was all going to play out!