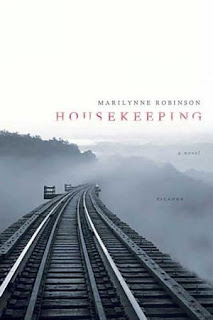 A modern classic, Housekeeping is the story of Ruth and her younger sister, Lucille, who grow up haphazardly, first under the care of their competent grandmother, then of two comically bumbling great-aunts, and finally of Sylvie, their eccentric and remote aunt. The family house is in the small Far West town of Fingerbone set on a glacial lake, the same lake where their grandfather died in a spectacular train wreck, and their mother drove off a cliff to her death. It is a town "chastened by an outsized landscape and extravagant weather, and chastened again by an awareness that the whole of human history had occurred elsewhere." Ruth and Lucille's struggle toward adulthood beautifully illuminates the price of loss and survival, and the dangerous and deep undertow of transience.

This was the January choice for the GoodReads Book Club I am part of  - Readalongs With KarenThis was an unexpected little gem of a book! I knew nothing of it before I picked up a copy, and found myself totally swept along with the compelling and often heartbreaking story of 2 sisters who are dealing with a number of tragedies in their lives, but they have one another. Lucille and Ruth are devoted to one another as they're pushed from pillar to post with various family members over the years, until they settle down with their Aunt Sylvie.What becomes clear is that Sylvie is not the most stable of women to be caring for 2 young girls, but there's something about her that Ruth and Lucille connect with, even if that means they live a very unstable life while under the care of Sylvie. Skipping school becomes the norm, and haphazard meals is what they come to expect.As the girls grow, they start to become their own people, none more so than Lucille and she seems to crave 'normality' and finds herself drifting apart from her sister and aunt to live a more conventional life. So Ruth becomes more attached to her aunt and the two of them seem more like sisters at time.This was beautifully written and a haunting read as you cared for these women as they'd been scarred by so much tragedy in their lives. It's a subtle story that never goes OTT and one to be savoured.