#BookReview IT STARTED WITH A GIGGLE by KIRSTY FERRY #publicationday @ChocLituk 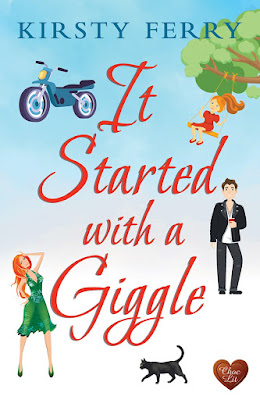 Sometimes the best things start in the strangest ways …. with a giggle!On a night out in Edinburgh, single mum Liza-Belle Graham finds herself revealing her hopes and dreams to a green-eyed stranger. Liza always wanted to run an “arty-crafty-booky” business, and she’s seen the perfect empty shop to make her dreams a reality. No harm in telling the stranger. It’s not like she’ll see him again …
But Scott McCreadie is no mystery man – he’s an interior designer looking for new premises. And who does Liza bump into when she arranges a viewing? None other than Scott trying to steal her perfect shop!Is Liza’s arty-crafty-booky dream in jeopardy, or is a new dream about to begin?

There's romance, drama, fun and a cat that always steals the show - what more do you want from a book?!  It's always wonderful to reconnect with characters from the Schubert series (Every Witch Way and A Christmas Secret ) and this time with get to follow the story of single mum Liza and Scott, who is Nessa's brother. They meet when she's on a rare night out and there's a spark between them, but then that could be the booze that Liza has been drinking! She opens up to him about her plans for her future business as she hopes to open an 'arty crafty bookstore' (don't we all?!).   He's also on the lookout for new premises for his interior design business, and when they find themselves looking at the same place their 'attraction' soon becomes 'irritation'!

When the owner of the building comes up with a compromise it's fun to watch to see if it works out for the both of them, and with  Liza's daughter Isa becoming firm friends with both Scott and Schubert, then maybe Liza can't be too negative about Scott for too long.  He has a 'sarky' side but also shows himself to be very understanding and compassionate. Liza has been on her own for quite sometime now so is used to doing things her way and looking out for her daughter, so maybe someone new on the scene  is a little daunting for her.

I found this latest installment in the series to be just as much fun to read as the others. I loved seeing how Schubert made his presence felt as always, and the characters in his world were just as fun to follow. It was heartwarming, dramatic and I had all the feels as the story evolved with a rather dramatic and unexpected twist!