Hello and Happy New Year!!!  Time to tame those TBR piles because this year is the year we will all get them under control.......... yeah I'm laughing too!! But at least we can pretend we're organised and this is my attempt to focus my reading energies in the right areas, until I get distracted by all the oter books on my shelves that I've ignored for months and years before!!

So this month is a mix of blog tour and review copies, bookclub book and new releases on my Netgalley shelf!! Easy Peasy..... help me!!!!!

A modern classic, Housekeeping is the story of Ruth and her younger sister, Lucille, who grow up haphazardly, first under the care of their competent grandmother, then of two comically bumbling great-aunts, and finally of Sylvie, their eccentric and remote aunt. The family house is in the small Far West town of Fingerbone set on a glacial lake, the same lake where their grandfather died in a spectacular train wreck, and their mother drove off a cliff to her death. It is a town "chastened by an outsized landscape and extravagant weather, and chastened again by an awareness that the whole of human history had occurred elsewhere." Ruth and Lucille's struggle toward adulthood beautifully illuminates the price of loss and survival, and the dangerous and deep undertow of transience

After the loss of war, can there be hope for the future?


Belinda Layton is a surplus girl. One of the many women whose dreams of marriage perished in the Great War, with the death of her beloved fiancé, Ben. After four years of mourning, she's ready to face the future, even though Ben's family is not happy to see her move on, and her own only cares about getting hold of her meagre factory wages.
Then, Belinda joins a secretarial class and a whole new world opens up to her as she quickly finds herself drawn to beguiling bookshop owner Richard Carson. But after all the loss and devastation she has experienced, can she really trust him with her heart?
THE MISSING LETTERS OF MRS BRIGHT by BETH MILLER
publication date - 9th January 2020

You’ve met Mrs Bright. She’s that nice woman who lives three doors down and always smiles at you in the mornings. She’s planning her thirtieth wedding anniversary with her husband. She wants to travel, read endless books and take beautiful pictures. She’s been waiting for this forever.For the past twenty-nine years, Kay Bright’s days have had a familiar rhythm: she works in her husband’s stationery shop, cooks for her family, tries to remember to practice yoga, and every other month she writes to her best friend, Ursula, and Ursula replies. Kay could set her calendar by their letters: her heart lifts when the blue airmail envelope, addressed in Ursula’s slanting handwriting, falls gently onto the mat.Ursula is the only one who knows Kay’s deepest secret, something that happened decades ago that could tear Kay’s life apart today. Ursula has always been the person Kay relies on. Knowing she will hear from Ursula is like being sure the sun will rise tomorrow.And now Ursula has stopped writing. Three missing letters doesn’t sound like a lot, but Kay gets out her shoebox of notes from her best friend, in case there’s something she overlooked. Ursula seems fine, but the further back she goes, the more Kay begins to question every choice she has made in her life. Which might be why, at ten o’clock one morning, Kay walks out of her yellow front door with a just a rucksack, leaving her wedding ring on the table...

The lives of two women—the sole survivor of an airplane crash and the troubled park ranger who leads the rescue mission to find her —intersect in a gripping debut novel of hope and resilience, second thoughts and second chances
I no longer pass judgment on any man nor woman. People are people, and I do not believe there is much more to be said on the matter. Twenty years ago I might have been of a different mind about that, but I was a different Cloris Waldrip back then. I might have gone on being that same Cloris Waldrip, the one I had been for seventy-two years, had I not fallen out of the sky in that little airplane on Sunday, August 31, 1986. It does amaze that a woman can reach the tail end of her life and find that she hardly knows herself at all.
When seventy-two-year-old Cloris Waldrip finds herself lost and alone in the unforgiving wilderness of the Montana mountains, with only a bible, a sturdy pair of boots, and a couple of candies to keep her alive, it seems her chances of ever getting home to Texas are slim.
Debra Lewis, a park ranger, who is drinking her way out of the aftermath of a messy divorce is the only one who believes the old lady may still be alive. Galvanized by her newfound mission to find her, Lewis leads a motley group of rescuers to follow the trail of clues that Cloris has left behind.
But as days stretch into weeks, and Cloris’s situation grows ever more precarious, help arrives from the unlikeliest of places, causing her to question all the certainties on which she has built her life.

LADY OF THE RAVENS by JOANNA HICKSON
Out 9th January 2020

My baptismal name may be Giovanna but here in my mother’s adopted country I have become plain Joan; I am not pink-cheeked and golden-haired like the beauties they admire. I have olive skin and dark features – black brows over ebony eyes and hair the colour of a raven’s wing…When Joan Vaux is sent to live in the shadow of the Tower of London, she must learn to navigate the treacherous waters of this new England under the Tudors. Like the ravens, Joan must use her eyes and her senses, if Henry and his new dynasty are to prosper and thrive.

IT STARTED WITH A GIGGLE by KIRSTY FERRY

Sometimes the best things start in the strangest ways …. with a giggle!On a night out in Edinburgh, single mum Liza-Belle Graham finds herself revealing her hopes and dreams to a green-eyed stranger. Liza always wanted to run an “arty-crafty-booky” business, and she’s seen the perfect empty shop to make her dreams a reality. No harm in telling the stranger. It’s not like she’ll see him again …But Scott McCreadie is no mystery man – he’s an interior designer looking for new premises. And who does Liza bump into when she arranges a viewing? None other than Scott trying to steal her perfect shop!Is Liza’s arty-crafty-booky dream in jeopardy, or is a new dream about to begin

With Zak and Ellie’s wedding day approaching, there's high excitement in the pretty village of Sunnybrook, especially among the Little Duck Pond Café crew. Ellie is over the moon with her romantic surprise wedding gift from Zak, and Madison is promising to organise a hen party to remember. Everyone has high hopes for a magical Christmas Eve wedding celebration at gorgeous Brambleberry Manor. (Even Maisie-Moo has a sparkling new outfit.)But sometimes, even the best-laid plans can go wrong. And with the journey to the altar turning out to be rockier than expected, it’s going to take nothing short of a Christmas miracle to ensure a happy ending . . .

STAY UP WITH HUGO BEST by ERIN SOMERS 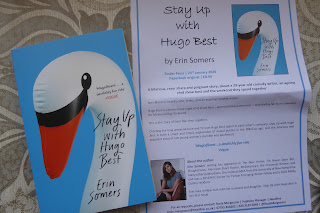 An incredibly timely, terrifically witty and moving debut about a young writer's assistant on a late night comedy show and what transpires when she accepts an invitation from its enigmatic host to spend a long weekend at his mansion in Connecticut.June Bloom is a broke, cynical twenty-nine-year-old writer's assistant on the late-night comedy show, Stay Up with Hugo Best. Hugo Best is in his sixties, a beloved icon of TV and humor, and a notorious womanizer. After he unexpectedly retires and a party is held for his now unemployed staff, June ends up at a dive bar for an open-mic night and prepares for the sad return to the anonymous comedian lifestyle. What she’s not prepared for is a run-in with Hugo at that dive bar. Nor for the invitation that swiftly follows: Hugo asks June to come to his mansion in Greenwich for the long Memorial Day weekend. “No funny business,” he insists.June, in need of a job and money, confident she can handle herself, but secretly harboring the remains of a childhood crush on the charming older comedian and former role model, accepts. The exact terms of the visit are never spelled out, but June is realistic and clear-eyed enough to guess. Even so, as the weekend unfolds and the enigmatic Hugo gradually reveals himself, their dynamic proves to be much more complicated and less predictable than she expected.

You never forget the one that got away. But what if ‘what could have been’ is still to come?Daniel was the first boy to make Alison a mix tape.But that was years ago and Ali hasn’t thought about him in a very long time. Even if she had, she might not have called him ‘the one that got away’; she’d been the one to run away, after all.Then Dan’s name pops up on her phone, with a link to a song from their shared past.For two blissful minutes, Alison is no longer an adult in Adelaide with temperamental daughters; she is sixteen in Sheffield, dancing in her too-tight jeans. She cannot help but respond in kind.And so begins a new mix tape.Ali and Dan exchange songs – some new, some old – across oceans and time zones, across a lifetime of different experiences, until one of them breaks the rules and sends a message that will change everything…Because what if ‘what could have been’ is still to come?

So that's a list of what I'm HOPING to read over the next  month! We will see how well I do sticking to the list! Maybe I'll finally succeed this year in reading what I'm planning to read!!