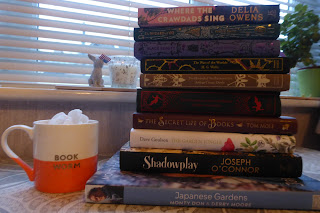 I was very lucky this Christmas to receive a book token or 3! And then the bookstores were happily having sales so how could I not take a browse and get clicking?!!  So this is the results and I'm a happy book bunny once more with my new purchases! Always happy to add to my Penguin Clothbound collection too and I'm just sad the photos don't do justice to how beautiful they are in the flesh!! 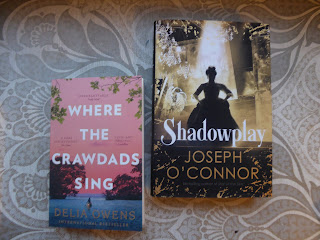 WHERE THE CRAWDADS SING by DELIA OWENS
For years, rumors of the “Marsh Girl” have haunted Barkley Cove, a quiet town on the North Carolina coast. So in late 1969, when handsome Chase Andrews is found dead, the locals immediately suspect Kya Clark, the so-called Marsh Girl. But Kya is not what they say. Sensitive and intelligent, she has survived for years alone in the marsh that she calls home, finding friends in the gulls and lessons in the sand. Then the time comes when she yearns to be touched and loved. When two young men from town become intrigued by her wild beauty, Kya opens herself to a new life–until the unthinkable happens.
Perfect for fans of Barbara Kingsolver and Karen Russell, Where the Crawdads Sing is at once an exquisite ode to the natural world, a heartbreaking coming-of-age story, and a surprising tale of possible murder. Owens reminds us that we are forever shaped by the children we once were, and that we are all subject to the beautiful and violent secrets that nature keeps.


SHADOWPLAY by JOSEPH O'CONNOR
1878- The Lyceum Theatre, London. Three extraordinary people begin their life together, a life that will be full of drama, transformation, passionate and painful devotion to art and to one another. Henry Irving, the Chief, is the volcanic leading man and impresario; Ellen Terry is the most lauded and desired actress of her generation, outspoken and generous of heart; and ever following along behind them in the shadows is the unremarkable theatre manager, Bram Stoker. Fresh from life in Dublin as a clerk, Bram may seem the least colourful of the trio but he is wrestling with dark demons in a new city, in a new marriage, and with his own literary aspirations. As he walks the London streets at night, streets haunted by the Ripper and the gossip which swirls around his friend Oscar Wilde, he finds new inspiration. But the Chief is determined that nothing will get in the way of his manager?s devotion to the Lyceum and to himself. And both men are enchanted by the beauty and boldness of the elusive Ellen. This exceptional novel explores the complexities of love that stands dangerously outside social convention, the restlessness of creativity, and the experiences that led to Dracula, the most iconic supernatural tale of all time. 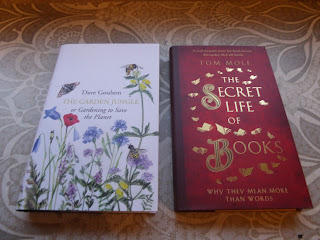 THE GARDEN JUNGLE by DAVE GOULSON
The Garden Jungle is a wonderful introduction to the hundreds of small creatures with whom we live cheek-by-jowl and of the myriad ways that we can encourage them to thrive.
The Garden Jungle is about the wildlife that lives right under our noses, in our gardens and parks, between the gaps in the pavement, and in the soil beneath our feet. Wherever you are right now, the chances are that there are worms, woodlice, centipedes, flies, silverfish, wasps, beetles, mice, shrews and much, much more, quietly living within just a few paces of you.
Dave Goulson gives us an insight into the fascinating and sometimes weird lives of these creatures, taking us burrowing into the compost heap, digging under the lawn and diving into the garden pond. He explains how our lives and ultimately the fate of humankind are inextricably intertwined with that of earwigs, bees, lacewings and hoverflies, unappreciated heroes of the natural world.
The Garden Jungle is at times an immensely serious book, exploring the environmental harm inadvertently done by gardeners who buy intensively reared plants in disposable plastic pots, sprayed with pesticides and grown in peat cut from the ground. Goulson argues that gardens could become places where we can reconnect with nature and rediscover where food comes from. With just a few small changes, our gardens could become a vast network of tiny nature reserves, where humans and wildlife can thrive together in harmony rather than conflict

THE SECRET LIFE OF BOOKS by TOM MOLE
We love books. We take them to bed with us. They weigh down our suitcases when we go on holiday. We display them on our bookshelves or store them in our attics. We give them as gifts. We write our names in them. We take them for granted. And all the time, our books are leading a double life.
The Secret Life of Books is about everything that isn’t just the words. It’s about how books transform us as individuals. It’s about how books – and readers – have evolved over time. And it’s about why, even with the arrival of other media, books still have the power to change our lives.
In this illuminating account, Tom Mole looks at everything from binding innovations to binding errors, to books defaced by lovers, to those imprisoning professors in their offices, to books in art, to burned books, to the books that create nations, to those we’ll leave behind.
It will change how you think about books. 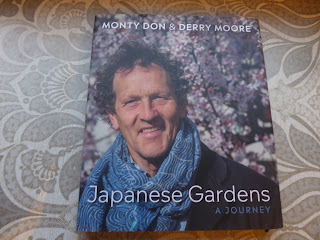 JAPANESE GARDENS by MONTY DON
The complement to the BBC2 series, Japanese Gardens: written by the nation's favourite gardener Monty Don, and beautifully produced with over 200 original photographs from Derry Moore.
Traditional Japanese gardens combine aesthetics with ethics, beauty with philosophy in a perfectly curated celebration of the natural world. A Japanese garden is the natural world made miniature: rocks represent mountains, ponds represent seas.
In this personal and lyrical exploration of both the traditional and the modern aspects of Japanese gardening, Monty Don takes a look at at the traditions and culture which inform some of the most beautiful and famous gardens from all over Japan, from Kenroku-en to the Zen gardens of Tokyo and the historic beauty of Kyoto.
Monty Don and Derry Moore travelled to Japan in spring and autumn, and this book guides us through the history and beauty of Japanese gardens in these spectacular seasons - from the famous cherry blossom celebration hanami to the autumnal crimson magnificence of momijigari. Monty Don also explores the creative forms uniquely associated with Japanese gardens, from stonemasonry and ikebana to the intricate skill of bonsai. Stunningly photographed by Derry Moore, Japanese Gardens is a fascinating exploration of a unique relationship with gardens. 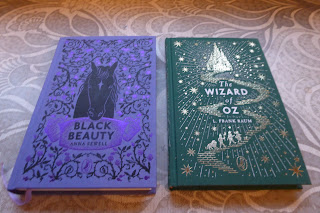 BLACK BEAUTY by ANNA SEWELL
Black Beauty spends his youth in a loving home, surrounded by friends and cared for by his owners. But when circumstances change, he learns that not all humans are so kind. Passed from hand to hand, Black Beauty witnesses love and cruelty, wealth and poverty, friendship and hardship . . . Will the handsome horse ever find a happy and lasting home? Carefully retold in clear contemporary language, and presented with delightful illustrations, these favorite classic stories capture the heart and imagination of young readers. By retelling the story in a shorter, simpler form, these books become highly engaging for children, and the color illustrations help with both comprehension and interest level. Black Beauty is part of a collectible series that has strong gift appeal.

THE WIZARD OF OZ by L FRANK BAUM
When Dorothy and her little dog Toto are caught in a tornado, they and their Kansas farmhouse are suddenly transported to Oz, where Munchkins live, monkeys fly and Wicked Witches rule. Desperate to return home, and with the Wicked Witch of the West on their trail, Dorothy and Toto - together with new friends the Tin Woodsman, Scarecrow and cowardly Lion - embark on a fantastic quest along the Yellow Brick Road in search of the Emerald City. There they hope to meet the legendary, all-powerful Wizard of Oz, who alone may hold the power to grant their every wish.

Just as captivating as it was a hundred years ago, this is a story that all ages will love 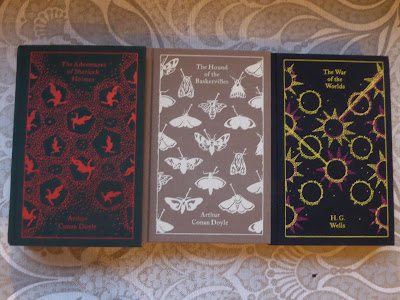 THE HOUND OF THE BASKERVILLES by ARTHER CONAN DOYLE
Part of Penguin's beautiful hardback Clothbound Classics series, designed by the award-winning Coralie Bickford-Smith, these delectable and collectible editions are bound in high-quality colourful, tactile cloth with foil stamped into the design.
The terrible spectacle of the beast, the fog of the moor, the discovery of a body, this classic horror story pits detective against dog. When Sir Charles Baskerville is found dead on the wild Devon moorland with the footprints of a giant hound nearby, the blame is placed on a family curse. It is left to Sherlock Holmes and Doctor Watson to solve the mystery of the legend of the phantom hound before Sir Charles' heir comes to an equally gruesome end

THE WAR OF THE WORLDS by H.G.WELLS
With H.G. Wells’ other novels, The War of the Worlds was one of the first and greatest works of science fiction ever to be written. Even long before man had learned to fly, H.G. Wells wrote this story of the Martian attack on England. These unearthly creatures arrive in huge cylinders, from which they escape as soon as the metal is cool. The first falls near Woking and is regarded as a curiosity rather than a danger until the Martians climb out of it and kill many of the gaping crowd with a Heat-Ray. These unearthly creatures have heads four feet in diameter and colossal round bodies, and by manipulating two terrifying machines – the Handling Machine and the Fighting Machine – they are as versatile as humans and at the same time insuperable. They cause boundless destruction. The inhabitants of the Earth are powerless against them, and it looks as if the end of the World has come. But there is one factor which the Martians, in spite of their superior intelligence, have not reckoned on. It is this which brings about a miraculous conclusion to this famous work of the imagination.


Not a bad little haul and still have some book tokens left over so until next time......
Posted by Books and Me! at Friday, January 03, 2020