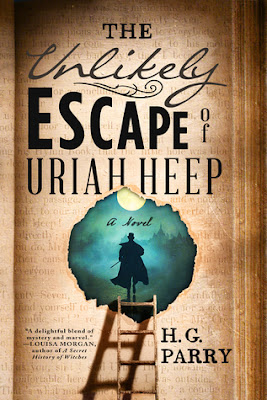 Delighted to be the latest stop on the Blog Tour for THE UNLIKELY ESCAPE OF URIAH HEEP by H.G.PARRY - my thanks to the author, publisher and Tracy Fenton of Compulsive Readers for putting this all together and letting me be part of it all!

The ultimate book-lover's fantasy, featuring a young scholar with the power to bring literary characters into the world, for fans of The Magicians, Mr. Penumbra's 24-Hour Bookstore, and The Invisible Library.For his entire life, Charley Sutherland has concealed a magical ability he can't quite control: he can bring characters from books into the real world. His older brother, Rob -- a young lawyer with a normal house, a normal fiancee, and an utterly normal life -- hopes that this strange family secret will disappear with disuse, and he will be discharged from his life's duty of protecting Charley and the real world from each other. But then, literary characters start causing trouble in their city, making threats about destroying the world... and for once, it isn't Charley's doing.There's someone else who shares his powers. It's up to Charley and a reluctant Rob to stop them, before these characters tear apart the fabric of reality.

H. G. Parry lives in a book-infested flat in Wellington, New Zealand, which she shares with her sister and two overactive rabbits. She holds a PhD in English literature from Victoria University of Wellington, and teaches English, film and media studies. Her short fiction has appeared in InterGalactic Medicine Show, Daily Science Fiction and small press anthologies. The Unlikely Escape of Uriah Heep is her debut novel.

A joy to read!! And I now have an overwhelming desire to read all of Dickens' work and see if I can work the magic to make my favourite (and those not so favourite!) characters  leap from the pages of a variety of books into my world, and see what transpires! Because if it's as half as entertaining as the goings on in this book then it will make the world an interesting place to be!

This book is an ode to books, a love letter to reading and all the places that stories take us, and to the characters it introduces us to. With the background that Charley Sutherland has, it allows the author to have so much fun with his 'ability' of bringing book characters to life. Something he's been able to do since his childhood - it's only when they start to cause trouble in the real world that he questions  this power and needs to find a way to put a stop to it all. His older brother, Rob, has always been the one to help him out in sticky situations and he's drawn into this 'split' world in a big way throughout this story. Can  he keep on going on fixing things for his little brother and the more he begins to investigate the past and these happenings, the more the plot thickens!

I loved the strangeness of the book! It was such good fun trying to guess which fictional character would appear next, and it was a perfect mix of the fun and serious! From Darcy to Dorian, Jabberwocky to Dr Frankenstein (to name but a few!), it's a real blast to see these characters operate out of context - some to help, others to hinder!

There's a great humour about the book as well, and it sits well with the mystery aspect along with the family dynamics and I just kept hoping the story would never end!

It's inventive, insane, emotional and incredibly enjoyable and I loved every single minute of my time in the world of Charley and Uriah Heep! Highly recommended!!
★★★★★ 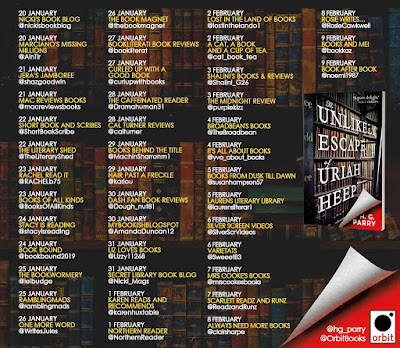