#BookReview THE ANIMALS AT LOCKWOOD MANOR by JANE HEALEY 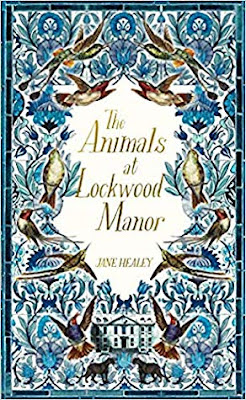 Some secrets are unspoken. Others are unspeakable . . .August 1939.Thirty-year-old Hetty Cartwright is tasked with the evacuation and safekeeping of the natural history museum’s collection of mammals. Once she and her exhibits arrive at Lockwood Manor, however, where they are to stay for the duration of the war, Hetty soon realizes that she’s taken on more than she’d bargained for.Protecting her charges from the irascible Lord Lockwood and resentful servants is work enough, but when some of the animals go missing, and worse, Hetty begins to suspect someone – or something – is stalking her through the darkened corridors of the house.As the disasters mount, Hetty finds herself falling under the spell of Lucy, Lord Lockwood’s beautiful but clearly haunted daughter. But why is Lucy so traumatized? Does she know something she’s not telling? And is there any truth to local rumours of ghosts and curses?Part love story, part mystery, The Animals at Lockwood Manor by Jane Healey is a gripping and atmospheric tale of family madness, long-buried secrets and hidden desires.

What is it with these old houses that are full of secrets and mysterious goings on?! I love it!! And at Lockwood Manor the past is full of darkness, and as Hetty moves in to overlook the storage of the animal collection from the National History Museum during the start of the war, she is plunged into a world of family struggles whilst trying to keep track of her exhbits that keep going missing!!Lockwood Manor is the home of Lord Lockwood and his daughter Lucy, along with a few members of staff and they're not all pleased to be having Hetty and her collection moving in. She gets an uneasy feeling from the house from the moment she moves in and the nightmares she has are the least of her problems during her time there.Along with the Hetty trying to settle, we also hear the story of Lucy Lockwood who has led a pretty tragic life since the death of her mother, alongside a father who seems to care very little for her. She has really bad anxiety and despite living a seemingly gilded life, you can't help but feel enormous sympathy for her. In Hetty she finds someone she can connect with, and start to feel a little safer and it was extremely touching to see how their friendship was a real strength for them both.As the unsettling feeling continues, there is more revealed from the past that was really shocking and I loved how the story centres around loneliness and the role that women were expected to play at that time. In Hetty and Lucy we get to see how different roles played out and it gave another dimension to the story.A really touching and enjoyable read.