#BookReview THE COTTAGE ON WILDFLOWER LANE by LIZ DAVIES 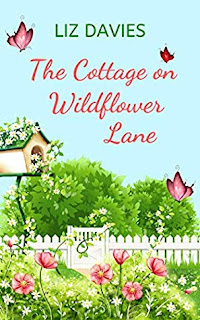 Esther's life isn’t perfect (whose is?) – but she’s happy enough living in her little flat with her boyfriend, Josh. But that’s about to change. Bored out of her mind in work, she wishes that something, anything, would happen to liven her life up. Unfortunately, her wish comes true when Josh calls her from the airport to tell her he’s going to work in a bar in Spain, and she’s not invited, Esther is devastated, and her unhappiness is compounded when she discovers she can actually view the bar via a webcam link and watch him chatting up other girls. But when she inadvertently clicks on a link to another webcam which shows a pretty cottage and the rather hunky man who lives in it, her interest is piqued and she wishes she could get to know him. Wishes don’t really come true, though – do they...?

With a stunningly dreamy cover, this was a story that captured my heart and had me tempted to start searching for cameras online to follow to see if the man of my dreams was out there!! If he is half as good as Kit in this story then I'd be a lucky woman!!Esther is the focus of this story - her life is tripping along with very little excitement and she thinks she's in a happy relationship with Josh, but he drops a bombshell when he calls from the airport to say he's moving out to Spain to work and they're over! What a charmer!!Esther has some lovely friends around her to help support her and one of them lets her know about webcams that are filming all over the world at homes and businesses, and she uses this to 'spy' on her ex - probably not the smartest way of spending time and helping to heal her broken heart! But while she's surfing she spots a cam trained on a most charming cottage with gorgeous garden and she finds comfort in watching the goings on here - and the hunky man living there helps!Meanwhile, we follow the story of Kit who is going through a divorce where his ex is theatening to take him to the cleaners and that means losing his beloved home and business. And seeing him being conflicted by his feelings towards a mystery woman he meets one night was also really enjoyable and leads to lots of fun banter, and romantic star gazing nights! My kind of guy!!I loved this story - it was so easy to read and relate to the characters! Esther and her attempts at internet dating provided some wonderful moments of humour (and horror!) and her addiction to the webcams proves just how easy we can be addicted to spending time online as it allows us to daydream and lose ourselves when things are proving a little tough. Highly recommended!!