#BookReview A LADDER TO THE SKY by JOHN BOYNE 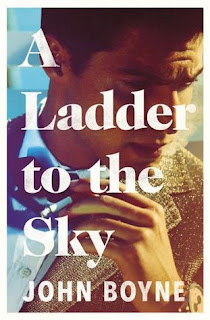 A psychological drama of cat and mouse, A Ladder to the Sky shows how easy it is to achieve the world if you are prepared to sacrifice your soul.If you look hard enough, you can find stories pretty much anywhere. They don’t even have to be your own. Or so would-be writer Maurice Swift decides very early on in his career. A chance encounter in a Berlin hotel with celebrated novelist Erich Ackermann gives him an opportunity to ingratiate himself with someone more powerful than him. For Erich is lonely, and he has a story to tell. Whether or not he should do so is another matter entirely.Once Maurice has made his name, he sets off in pursuit of other people’s stories. He doesn’t care where he finds them – or to whom they belong – as long as they help him rise to the top. Stories will make him famous but they will also make him beg, borrow and steal. They may even make him do worse.

A brilliant read! One of those books where you hate the main character but just can't stop reading to see how he would take advantage of people next and just how low he'd sink in his life, and his quest to be successful. And he sinks low!!Maurice wants to be a novelist but has no original ideas of his own so when he meets a celebrated older author, Erich Ackerman, in a Berlin hotel he finds a way to get a story as Erich opens up to him, flattered that this handsome young man is so interested in him. And the story he has to tell is worthy of being in any book so Maurice uses his 'charm' to be his confidante - happy to toss him aside when his new book is released.Each chapter then is the next stage in the life of Maurice - the people he meets, uses, loses - and with each revelation, your disgust for this character just grows! Nobody is seemingly safe in his path, and he seems to have no qualms about using others for his own benefit, even those apparently closest to him and a couple of the storylines really had me shocked!I think we've all met characters like Maurice who are happy to take credit where it hasn't been earned, just as long as they get what they want out of it and their moral compass seems to be missing, but they seem to have this annoying knack of always coming out smelling of roses! He's brilliantly captured in this book and I found it to be a breathtaking read!