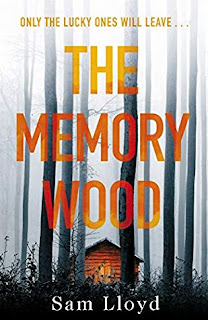 The must-read novel of 2020. Chilling, moving and unputdownable, The Memory Wood is a thriller like no other.
*************
Elijah has lived in the Memory Wood for as long as he can remember. It’s the only home he’s ever known.
Elissa has only just arrived. And she’ll do everything she can to escape.
When Elijah stumbles across thirteen-year-old Elissa, in the woods where her abductor is hiding her, he refuses to alert the police. Because in his twelve years, Elijah has never had a proper friend. And he doesn’t want Elissa to leave.
Not only that, Elijah knows how this can end. After all, Elissa isn’t the first girl he’s found inside the Memory Wood.
As her abductor’s behaviour grows more erratic, Elissa realises that outwitting strange, lonely Elijah is her only hope of survival. Their cat-and-mouse game of deception and betrayal will determine both their fates, and whether either of them will ever leave the Memory Wood . . .
PUBLISHED BY TRANSWORLD

MY REVIEW
I read this via The Pigeonhole app.
I really don't know where to even begin in reviewing this one!  It was a book that was brutal, evil, dark, twisty, shocking, heartbreaking, emotional, traumatizing and more, and I loved every single word of it!!! I was eager to read each chapter as the twists and turns went to the extremes and back, leaving you breathless but totally invested in how each scene would play out!
It's difficult to review this one without revealing too much, but it starts out the simple story of a young girl who plays chess, Elissa Mirzoyan, being taken from a chess tournament. What follows is anything but simple but you follow the story from her point of view alongside the frantic search by the police, led by Mairead who is going through her own personal traumas, and how the time factor plays such a crucial part in the investigation of a missing child.
When Elissa is chained up by her captors, she is visited by a young boy in the darkness 'Elijah' and despite her desperate situation, she starts to use her 'smarts' to try and befriend him into finding a way out.  I'm not sure I would have been able to remain as level headed as her in a similar situation, but her ingenuity was staggering and how her chess mind came into play on more than one occasion.
This is a book that totally unsettles you! You think you can guess what's going on but you'd be  totally and utterly wrong!!  It was tense, it was shockingly emotional, it was twisted and is definitely going to be one of my most favourite reads of the year - and it's only February!! A must read!!!