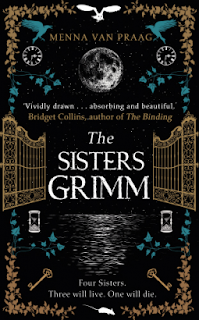 The critically acclaimed author of The House at the End of Hope Street combines love, mystery, and magic with her first foray into bewitching fantasy with a dark edge evocative of V.E. Schwab and Neil Gaiman.Once upon a time, a demon who desired earthly domination fathered an army of dark daughters to help him corrupt humanity . . .As children, Goldie, Liyana, Scarlet, and Bea dreamed of a strange otherworld: a nightscape of mists and fog, perpetually falling leaves and hungry ivy, lit by an unwavering moon. Here, in this shadowland of Everwhere, the four girls, half-sisters connected by blood and magic, began to nurture their elemental powers together. But at thirteen, the sisters were ripped from Everwhere and separated. Now, five years later, they search for one another and yearn to rediscover their unique and supernatural strengths. Goldie (earth) manipulates plants and gives life. Liyana (water) controls rivers and rain. Scarlet (fire) has electricity at her fingertips. Bea (air) can fly.To realize their full potential, the blood sisters must return to the land of their childhood dreams. But Everwhere can only be accessed through certain gates at 3:33 A.M. on the night of a new moon. As Goldie, Liyana, Scarlet, and Bea are beset with the challenges of their earthly lives, they must prepare for a battle that lies ahead. On their eighteenth birthday, they will be subjected to a gladiatorial fight with their father’s soldiers. If they survive, they will face their father who will let them live only if they turn dark. Which would be fair, if only the sisters knew what was coming.So, they have thirty-three days to discover who they truly are and what they can truly do, before they must fight to save themselves and those they love.

I read this via THE PIGEONHOLE app.

I loved the mix of female characters, fantasy and the modern world in this compelling story, and it's one of those books that you really lose yourself in! And that opening is a brilliant way to lead you into the Sisters Grimm world - very inspiring!The 4 sisters are struggling with their own problems in their day to day life, but there's always that feeling that there's something more going on with visions and dreams and it was so rewarding seeing how the story built up when these 'sisters' are reunited approaching their 18th birthdays - when a whole new life is ahead of them and they have to choose their paths! This is a coming of age of a different kind for them all!My favourite sister is Goldie as I just found her story easier to connect with and the introduction of Leo added the romance element which I really enjoyed. But all the sisters had their own interesting stories and the way the story was told really worked for me - I liked dipping in and out of each of their timelines while strange things started to happen and they were trying to work out why these things were going on.It was magical and mystical, filled with dark and light moments and the struggles each girl faced made them much easier to find a connection with for me as a reader. These girls aren't perfect - they're torn, they have fears and doubts, life doesn't always work out for them as they hoped and there's always that element of wondering whether they are going to go down a darker path. It's a story about finding your place in the world and that's a very easy thing to relate to! A fabulous fantasy read - and I'm hoping there'll be more from this Grimm world!