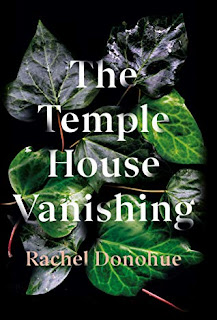 Twenty-five years ago, a sixteen-year-old schoolgirl and her charismatic teacher disappeared without trace...

In an elite Catholic girls' boarding-school the pupils live under the repressive, watchful gaze of the nuns. Seeking to break from the cloistered atmosphere two of the students - Louisa and Victoria - quickly become infatuated with their young, bohemian art teacher, and act out passionately as a result. That is, until he and Louisa suddenly disappear.

Years later, a journalist uncovers the troubled past of the school and determines to resolve the mystery of the missing pair. The search for the truth will uncover a tragic, mercurial tale of suppressed desire and long-buried secrets. It will shatter lives and lay a lost soul to rest.

I read this via the Pigeonhole app.This was a dark, unsettling slow burn of a read that really explores the complexities of obsessive love and teenage girls. How growing up can be so tangled and traumatic, and how the art of love can cloud the judgement of those involved.The story centres around a school where a teacher and young student went missing 25 years ago and the scandal has never really died down. So when a journalist gets the chance to investigate the story a little deeper, even she isn't prepared for what she's about to find out.The story is also told from the viewpoints of the girls from the elite Catholic boarding school - Louisa and Victoria - who were involved at the time with the art teacher Mr Lavelle and his influence on them and other girls under his 'charge'. This was always the unsettling part of the story for me - a teacher taking advantage of his position, knowing full well that the young girls were battling with their own identities and feeling vunerable. The more you read into the story though, the more you understand just how vindictive and manipulative that teenage girls can be!!With the mystery into the whereabouts of the teacher and student being told slowly, we get to hear how the events affected everyone then and now - how they were seduced by personalities, probably in rebellion to the strict rules imposed on their day to day life at the school. This art teacher gave them the chance to express themselves more - some may have just taken that a little too literally!I did find the 'to and fro' way of story telling a little confusing at times, and that may have affected my ability to connect more with these characters. They came across as quite heartless and that made it difficult to bond with them, but maybe that was their age showing and it was all just a front to save themselves from hurt. They were quick to put up walls to protect themselves when needed and that was how they dealt with the world around them. None of them wanted to appear vunerable as others would have taken advantage of that fact.The viewpoint of the journalist was an interesting aspect - she had a vague connection with one of the girls and the area so that helped her delve a little deeper than others had gone, and she often seemed shocked by what she found out. Looking back at life at the school between the girls just goes to show how vicious young women can be - girls are evil!!! But they thought they were in love! They were deluded and their powers of rational thought had long gone so the consequences often proved to be more brutal than they should have been.An interesting study of characters and a brooding read!