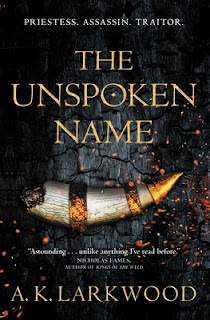 What if you knew how and when you will die?Csorwe does — she will climb the mountain, enter the Shrine of the Unspoken, and gain the most honored title: sacrifice.But on the day of her foretold death, a powerful mage offers her a new fate. Leave with him, and live. Turn away from her destiny and her god to become a thief, a spy, an assassin—the wizard's loyal sword. Topple an empire, and help him reclaim his seat of power.But Csorwe will soon learn – gods remember, and if you live long enough, all debts come due.

I'm always excited to discover a new fantasy world to disappear into, and this one delivers on all fronts of excitement, twists, diversity, drama, humour and a new superstar character in Csorwe who we follow as she is set on a new path She's always been brought up knowing she was going to die on her 14th birthday and while that's not the best kind of birthday present one can hope for, she's offered a new fate on the day she's due to be 'sacrificed' and boy is she in for a rollercoaster of a ride, as she becomes a wizard's loyal sword-hand! Bring on the fights, the deception and the magic!I often find with some fantasy novels that they can drag a little on the pace front - there's a lot of world building and characters to explore, but that often slows the flow right down - but that doesn't happen with the way the author writes this book. It zips along and covers the story over a few years and, although there's lots going on, there's always a chance to keep your bearings, so to speak, and that made for such a connection with this story and the characters within. There's also a very helpful list of characters and how to pronounce their names at the beginning of the book - invaluable!!Csorwe is on a real learning process alongside Sethennai as she visits places she's only ever heard about after her incredibly sheltered life, but she soon finds out she's more capable than she ever imagined as she faces all that is thrown her way. The story is told from a variety of POV's which I really enjoyed and there's a huge variety of personalities and it was good fun keeping track of who was there to help or hinder Csorwe and her progress! Just why did Sethennai choose her in the first place? And what consequences will there be for her not following her original destiny?! There's so much to explore along her journey and I found myself doing the 'just one more chapter' thing as I couldn't bear not knowing what was going to happen next!!An exciting introduction to this duology and I'm eagerly counting down the days until we get to read more about Csorwe and the world she finds herself a part of!