#BookReview THE BLACK AND THE WHITE by ALIS HAWKINS 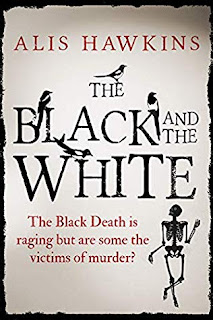 A thought-provoking Medieval mystery you don’t want to miss! Perfect for fans of S D Sykes, L C Tyler, Karen Maitland and S J Parris.
Not every corpse put in a pit has died of the plague…
England, 1349
The Black Death is tearing through the country and those not yet afflicted are living in fear.
Martin Collyer wakes up in his family's charcoaling hut in the Forest of Dean to find his father dead on the bed beside him, half-sewn into his shroud. As Martin’s most recent memory is of being given the last rites, he cannot account for why he is alive and why his father – whose body bears not a trace of the plague – is dead.
With no home to go to and set free from the life of virtual servitude that his father had planned for him, Martin sets off on a journey across England to seek salvation for his father’s unconfessed soul.
He befriends another traveller on the way. But the man – Hob Cleve – seems to be harbouring dark secrets of his own.
As more suspicious deaths occur, Martin is left wondering whether Hob can be trusted.
What is Hob hiding? Is Martin travelling with a killer?

And what really led to Martin’s miraculous recovery?
THE BLACK AND THE WHITE is a chilling historical mystery set during the Medieval plague era.

A timely read considering the world we find ourselves  living in, and I was utterly absorbed by this historical tale, set during the Great Plague and following a man on a mission of discovery. Not easy when you are joined on your journey by a man who has completely different values and outlook on life.

Martin finds himself waking up alongside his dead father, while the plague ravages family and villages, and wonders why he's been spared. He wakes up clutching a figure of Saint Cynryth, a figure his father idolised, and Martin sees this as a sign to seek salvation for his father and to spread the word of this Saint that may, or may not, have saved his own life.

Martin is a quirky character! He is utterly devoted to doing the right thing and playing by the rules, but is troubled by nightmares - during the day he's lonely, by night he's terrified by demons.  As he travels from village to village on his way to Salster, where the shrine to the Saint is said to be, he is joined by Hob, who appears from nowhere to save him from being attacked.

Wary but glad of the company, they make an odd duo travelling along and I loved watching their different attitudes towards the 'miracle' - Hob is a cynical soul and is bemused by the hold that this Saint has over Martin!  The way they challenge each other and their way of thinking was a fascinating part of the journey for me, and wondering if either of them really trust one another.  There are also a number of strange goings on that happen along the way which were an added twist to try and unravel!  It's a story that plays on the emotions of the characters - Martin especially as he's trying to find meaning amongst grieving for the loss of his family and finding himself alone.

It's a slow burner of a story but that allows you to immerse yourself more in the characters and get to understand their state of mind, and I thought the ending was particularly bittersweet and unexpected!