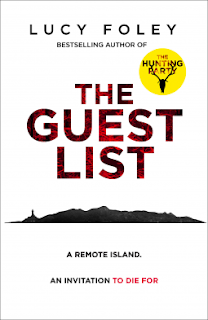 A wedding celebration turns dark and deadly in this deliciously wicked and atmospheric thriller reminiscent of Agatha Christie from the author of The Hunting Party.


On an island off the coast of Ireland, guests gather to celebrate two people joining their lives together as one. The groom: handsome and charming, a rising television star. The bride: smart and ambitious, a magazine publisher. It’s a wedding for a magazine, or for a celebrity: the designer dress, the remote location, the luxe party favors, the boutique whiskey. The cell phone service may be spotty and the waves may be rough, but every detail has been expertly planned and will be expertly executed.
But perfection is for plans, and people are all too human. As the champagne is popped and the festivities begin, resentments and petty jealousies begin to mingle with the reminiscences and well wishes. The groomsmen begin the drinking game from their school days. The bridesmaid not-so-accidentally ruins her dress. The bride’s oldest (male) friend gives an uncomfortably caring toast.
And then someone turns up dead. Who didn’t wish the happy couple well? And perhaps more important, why?
PUBLISHED BY HARPERCOLLINS
PURCHASE LINKS
Amazon
Goldsboro Books - signed first edition
hive.co.uk

MY REVIEW
I found this to be the perfect example of a page turner! The more I read, the more I wanted to know!! It builds up brilliantly, allowing you a look at the story unfolding from different points of view and letting you try to work out just how it would all play out - I thought I'd guessed it but I was wrong!!A wedding party travels to Ireland and what should be a celebration turns into disaster with the murder of one of the party - you don't find out who until much later and that helps build up the tension as there are a lot of people bearing grudges! Add alcohol to the mix and the masks come off and long standing tension needs to be resolved! And boy does it get resolved!!Told from the point of view from the bride, the best man, the bridesmaid, the plus one and the wedding planner, it's a story that springs backwards and forwards seamlessly as the before, during and after are played out and it's often not pretty! Squabbles, resentment and revenge are brought to the fore! And with a bad storm approaching, there's an undercurrent of doom hanging over everybody!My favourite characters were Hannah (the plus one) and Olivia (the bridesmaid) as they were the characters I found the most relatable and down to earth! They were down to earth, while some other characters were in danger of disappearing up their own backsides!! Dealing with their own issues, they found the company of each other a safe space to be and could open up easily to one another.With alcohol flowing, and a toxic male environment it doesn't take long before secrets of the past are revealed adding to the drama of the weekend and I enjoyed the tension building immensely and can't wait to see what Lucy Foley has in store for us with her next book!!
★★★★★