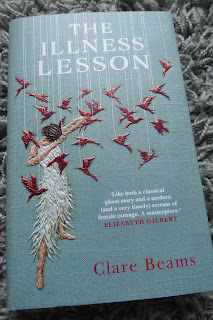 This was an intriguing, and often horrifying, story that features a group of girls who are plagued with mysterious rashes and fainting spells, while at a new school set up by Samuel Hood and his daughter Caroline. Their lives had been 'plagued' by the sight of strange red birds, named The Trilling Hearts, by Caroline's late mother, and their reappearance prompts Samuel into opening this school to 'educate' and shape these young women, but his motives appear to be a little off kilter and it was intriguing to see this play out.Caroline is a fascinating character as she's always lived with her father and has been left traumatised by the death of her mother. She wants to find her own voice but often seems unsure how to use it. She is used to deferring to the men in her life as they tell her their opinion is more important - not uncommon at that time. Women appear only to have purpose as a wife and a mother.So when this small group of girls come together, all appears fine for a while and then strange things start happening, mainly to Eliza to begin with. She seems to be the 'alpha' female of the group, not afraid to voice her opinion, but when she becomes poorly it shocks the others, who begin to show similar illness traits. Is this hysteria as diagnosed by the men? What have the red birds got to do with it all? The rather unpleasant character of Hawkins is brought in to treat these girls - I'm still shuddering now..........This was a book that was really thought provoking, especially as a female. I would have liked to have felt a bit more of a connection with the girls though as they often all seemed to blend into one, other than Eliza, but the role of Caroline was well played out. It was a little slow paced at times but I think that added to the impact of the claustrophobia and suppression of these girls not being taken seriously.