#BookReview THE LODGER by LOUISA TREGER 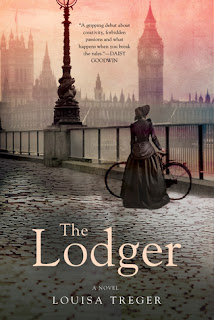 The first biographical novel about Dorothy Richardson, peer of Virginia Woolf, lover of H.G. Wells, and central figure in the emergence of modernist fictionDorothy exists just above the poverty line, doing secretarial work at a dentist's surgery and living in a seedy boarding house in Bloomsbury, when she is invited to spend the weekend with a childhood friend. Jane recently married a writer who is hovering on the brink of fame. His name is H.G. Wells, or Bertie as he is known to friends.Bertie appears unremarkable at first. But then Dorothy notices his grey-blue eyes taking her in, openly signalling approval. He tells her he and Jane have an agreement which allows them the freedom to take lovers, although Dorothy is not convinced her friend is happy with this arrangement.Not wanting to betray Jane, yet unable to draw back, Dorothy free-falls into an affair with Bertie. Then a new boarder arrives at the house—striking unconventional Veronica Leslie-Jones, determined to live life on her own terms—and Dorothy finds herself caught between Veronica and Bertie. Amidst the personal dramas and wreckage of the militant suffragette movement, Dorothy finds her voice as a writer.The Lodger is a beautifully intimate novel that is at once an introduction to one of the most important writers of the 20th century and a compelling story of one woman tormented by unconventional desires.

A fascinating story with a mix of fact and fiction that did a wonderful job of transporting me back in time, and brought the story of Dorothy Richardson to my attention, as I'm ashamed to say I knew very little of her and her work before I picked this book up.This follows the story of Dorothy as she moves to London and tries to find her way, and herself!, in a world that is very sexist and dismissive of women and their intentions to make it in the world. She's working as a dentist's secretary, living in poverty in a room in a boarding house, but feels that there's more to this world, even if she's unsure what that is and how she fits into it. She catches the eye of her friends' husband, the one and only H G Wells, and embarks on an affair with him that seems to be unsatisfying for both of them but they just can't seem to live without each other. She knows she shouldn't do what she's doing but seems unable to stop herself! But what he does encourage her to do is to write, and spending time with him she starts to discover more about herself and just how resilient she really is. You can understand her dilemma though as the attention must have been flattering and as she was so unsure of herself. It must have been a huge boost to her ego that someone as well known as H G Wells would show an interest in her.Another fascinating character is Veronica whom she meets at the boarding house, and that was an intriguing twist to the tale and allowed them both to find comfort in one another - but in secret! It's also set around the suffragete time so reading about the treatment the women received was staggering and just vile but really brought it to the fore about what those women were fighting for.It's a story of loss, loneliness and self discovery and I thoroughly enjoyed the journey I was taken on with Dorothy and the world she lived in.