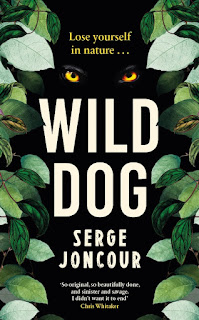 'So original, so beautifully done, and sinister and savage. I didn’t want it to end' Chris Whitaker, author of Tall OaksWhen you're confronted with a wolf, you have to think like a wolf...Franck and Lise, a French couple in the film industry, rent a cottage in the quiet hills of the French Lot to get away from the stresses of modern life.In this remote corner of the world, there is no phone signal. A mysterious dog emerges, looking for a new master. Ghosts of a dark past run wild in these hills, where a German lion tamer took refuge in the First World War…Franck and Lise are confronted with nature at its most brutal. And they are about to discover that man and beast have more in common than they think.

This was a quietly unsettling story which worked so well over the dual timelines in which it is set. And if you think living in isolation in the hills of France would be a pleasant, relaxing experience, then think again!!Set in 1917 and 2017, we follow stories that are very different in their context, but very similar in their outcome! Elements of fear are mixed with the reality of day to day life and it was an exhilarating mix as the two worlds mirrored each other with the noises of the animals in the hills echoing around.In 2017, Lise and Franck rent a cabin high up in the hills. She's recovering from illness and wants away from the stresses and strains of modern living. Franck is not so keen and the whole idea of being without a phone signal terrifies him! She immediately settles into the life of peace and tranquility, whereas it just sets Franck off on high alert - afraid of every noise he hears, or movement he sees. The only peace he finds is when he goes to a nearby village to be amongst people for supplies and a coffee, and to catch up on his phone messages as he's stressed by work issues.And back in 1917, it's a newcomer to the hills that unsettles the locals, especially with the start of the War hitting them hard, and this unknown strange German in the hills, with his lions and tigers - can they trust him? Is it safer for them with him around? For their peace of mind they share an uneasy truce with him, and life carries on but there's lots of fear around and they seek comfort in faith. They have so many questions about this Lion tamer in the hills - why is he there? how is he feeding his animals? - but the mayor seems to be on his side so they settle into trying their best to ignore him and getting on with their lives, but with strange things happening it's not long before nerves are on edge. And when he gets close to one of the villagers you wonder how that will change the dynamics of the lives they're all living.With work pressure building for Franck, Lise seems totally at ease amongst nature and I enjoyed seeing how they both reacted to the environment they were living in. The story seemed to switch to a darker theme with Franck and his battle with his mind, and the introduction of a wild dog that shows up on their doorstep that seems to have a connection with Franck. The silence used to be deafening for Franck, but the more time he spends in his surroundings it seems to give him clarity about a few things going on his life and he knows he needs to act on that.I enjoyed the unpredictability of the story and a few of the threads took me by surprise which was really clever and it appealed to my twisted mind in showing how irrational our minds can make us at times of stress and fear. The remote setting was perfect and added to the uneasy feeling that you get as a reader as you watch events unfold. An enjoyable and dark read!