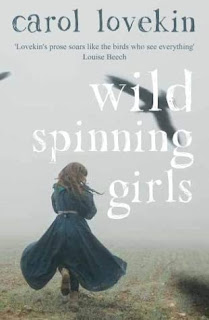 If it wasn’t haunted before she came to live there, after she died, Ty’r Cwmwl made room for her ghost. She brought magic with her.

And the house, having held its breath for years, knew it. Ida Llewellyn loses her job and her parents in the space of a few weeks and, thrown completely off course, she sets out for the Welsh house her father has left her. Ty’r Cwmwl is not at all welcoming despite the fact it looks inhabited, as if someone just left..

It is being cared for as a shrine by the daughter of the last tenant. Determined to scare off her old home’s new landlord, Heather Esyllt Morgan sides with the birds who terrify Ida and plots to evict her. The two girls battle with suspicion and fear before discovering that the secrets harboured by their thoughtless parents have grown rotten with time. Their broken hearts will only mend once they cast off the house and its history, and let go of the keepsakes that they treasure like childhood dreams.

This was a haunting and spellbinding read that I savoured from start to finish. It's a story of grief,the damage secrets can create in a family and was just beautifully written and I was loathed to finish the last page as I didn't want it to end.It's a story of complicated family relationships - Ida is travelling back to Wales to the family home after the loss of her parents, and trying to deal with the emotions of returning to a place where she remembers her mother being very unhappy, whilst trying to deal with her own grief and feeling so alone. Her isolation is disturbed by the appearance of Heather, who is the daughter of the previous tenant, and still sees the house as her own home and a connection to the memories she shared there with her mother.Both women are very different characters and this causes a clash immediately, and it was absolutely fascinating to see how they both dealt with the grief they're suffering. While one seems to gain strength from it, the other seems to falter as the more she discovers about the past is revealed.The house itself plays a big part in the storyline, with its' setting and the importance it played in these people's life. They say 'if walls had ears' and this house has seen lots going on in the past that it seems that it wants to share what it knows with these 2 women.As the stories of the past unfold, Ida and Heather are discovering new things about the history they thought they knew and I loved the pace of secrets being uncovered. Ida, in particular, seems scared of her own shadow at times and you wonder where that distrust has come from. Heather seems a much calmer and self assured character and tries to teach Ida about the ways of the earth - making peace with what is around you to find peace yourself.This was a book that touches your soul and I adored it! Highly recommended!!