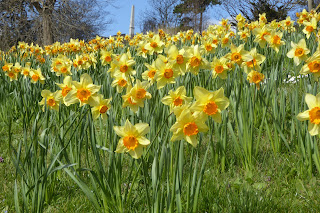 Hello all.  If there's ever a time when I'm glad to have books to distract me from the world out there, then this is it. I hope everyone is staying safe and finding their own ways to deal with what is going on.   I think if you read a book that had this storyline, you wouldn't believe it......

So on to books! I've not been reading so much this week - although weirdly the books I've read have had a darker and disease feel to them! - but I've made up for it on the book buying front!! 6 new books have made their way into my life thanks to Waterstones vouchers - what better time to treat yourself than now I say!!

THE BLACK AND THE WHITE by ALIS HAWKINS - 4 STARS

Just the one from Netgalley....

Q by CHRISTINA  DALCHER
out April 2020

IN THIS WORLD, PERFECTION IS EVERYTHING
Elena Fairchild is a teacher at one of the state’s new elite schools. Her daughters are exactly like her: beautiful, ambitious, and perfect. A good thing, since the recent mandate that’s swept the country is all about perfection.
Now everyone must undergo routine tests for their quotient, Q, and any children who don’t measure up are placed into new government schools. Instead, teachers can focus on the gifted.
Elena tells herself it’s not about eugenics, not really, but when one of her daughters scores lower than expected and is taken away, she intentionally fails her own test to go with her.
But what Elena discovers is far more terrifying than she ever imagined…

MY PEAR-SHAPED LIFE by CARMEL HARRINGTON
proof received for review. 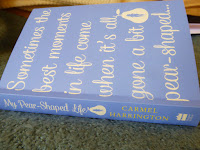 This is a joyful, uplifting book for those of us who sometimes wake up and feel we’re not good enough. Spoiler alert: we are!Meet Greta.She’s funny.She’s flawed.She’s hiding so much behind her big smile she’s forgotten who she is.But Greta is about to discover that the key to being happy is…being you.Greta Gale has played the part of the funny fat one her entire life, hiding her insecurities behind a big smile. But size doesn’t matter when you can laugh at yourself, right?Until Greta realises she’s the only one not laughing. And deep down, she’s not sure if she’ll ever laugh again.But with her world feeling like it’s falling down around her, Greta is about to discover she’s stronger than she feels. And that sometimes the best moments in life come when it’s all gone a bit pear-shaped…

And here's what I've been treating myself to - seduced by stunning covers once more!!

THE SONG OF THE TREE by CORALIE BICKFORD-SMITH 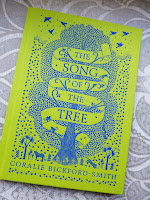 A lyrical, heart-warming new tale from the award-winning designer and creator of The Fox and the StarBird loves to sing in the towering tree at the heart of the jungle. It feels like home.When the season changes she must say goodbye, but she isn't ready to let go.As she listens to the other animals, Bird learns to sing a new song. 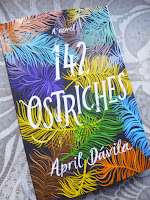 Set against the unexpected splendor of an ostrich ranch in the California desert, April Dávila's beautifully written debut conjures an absorbing and compelling heroine in a story of courage, family and forgiveness.When Tallulah Jones was thirteen, her grandmother plucked her from the dank Oakland apartment she shared with her unreliable mom and brought her to the family ostrich ranch in the Mojave Desert. After eleven years caring for the curious, graceful birds, Tallulah accepts a job in Montana and prepares to leave home. But when Grandma Helen dies under strange circumstances, Tallulah inheritseverything--just days before the birds inexplicably stop laying eggs.Guarding the secret of the suddenly barren birds, Tallulah endeavors to force through a sale of the ranch, a task that is complicated by the arrival of her extended family. Their designs on the property, and deeply rooted dysfunction, threaten Tallulah's ambitions and eventually her life. With no options left, Tallulah must pull her head out of the sand and face the fifty-year legacy of a family in turmoil: the reality of her grandmother's death, her mother's alcoholism, her uncle's covetous anger, and the 142 ostriches whose lives are in her hands. 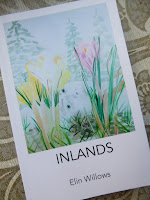 A young woman from Stockholm relocates to her boyfriend’s home town, a small village in the far north of Sweden. The relationship has ended by the time she arrives.Inlands is a story about loss and change and examines the tangible mechanics of everyday life, the mentality of a small community and the relationship between freedom and loneliness.

THE HOUSE OF THE SPIRITS by ISABEL ALLENDE 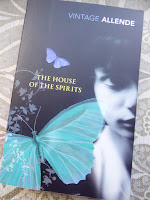 As a girl, Clara del Valle can read fortunes, make objects move as if they had lives of their own, and predict the future. Following the mysterious death of her sister, Rosa the Beautiful, Clara is mute for nine years. When she breaks her silence, it is to announce that she will be married soon to the stern and volatile landowner Esteban Trueba.Set in an unnamed Latin American country over three generations, The House of the Spirits is a magnificent epic of a proud and passionate family, secret loves and violent revolution.

THE DISCOMFORT OF EVENING by MARIEKE LUCAS RIJNEVELD 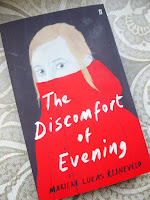 I thought about being too small for so much, but that no one told you when you were big enough ... and I asked God if he please couldn't take my brother Matthies instead of my rabbit. 'Amen.'

Jas lives with her devout farming family in the rural Netherlands. One winter's day, her older brother joins an ice skating trip; resentful at being left alone, she makes a perverse plea to God; he never returns. As grief overwhelms the farm, Jas succumbs to a vortex of increasingly disturbing fantasies, watching her family disintegrate into a darkness that threatens to derail them all.

A bestselling sensation in the Netherlands by a prize-winning young poet, Marieke Lucas Rijneveld's debut novel lays everything bare. It is a world of language unlike any other, which Michele Hutchison's striking translation captures in all its wild, violent beauty. Studded with unforgettable images - visceral, raw, surreal - The Discomfort of the Evening is a radical reading experience that will leave you changed forever.

APEIROGON by COLUM McCANN
Goldsboro Book of the Month 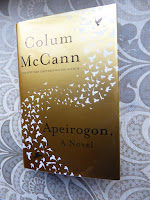 The National Book Award-winning and New York Times bestselling author of Let the Great World Spin tells an epic story rooted in the real-life friendship between two men united by loss in this daring, symphonic novel.Colum McCann's most ambitious work to date, Apeirogon--named for a shape with a countably infinite number of sides--is a tour de force concerning friendship, love, loss, and belonging.Bassam Aramin is Palestinian. Rami Elhanan is Israeli. They inhabit a world of conflict that colors every aspect of their daily lives, from the roads they are allowed to drive on to the schools their daughters, Abir and Smadar, each attend, to the checkpoints both physical and emotional that they must negotiate.Their worlds shift irreparably after ten-year-old old Abir is killed by a rubber bullet and thirteen-year-old Smadar becomes the victim of suicide bombers. When Bassam and Rami learn of one another's stories, they recognize the loss that connects them and they attempt to use their grief as a weapon for peace.McCann crafts Apeirogon out of a universe of fictional and non-fictional material. He crosses centuries and continents, stitching time, art, history, nature, and politics together in a tale both heartbreaking and hopeful. Musical, cinematic, muscular, delicate, and soaring, Apeirogon is a novel for our times.

THE GARDEN JUNGLE by DAVE GOULSON