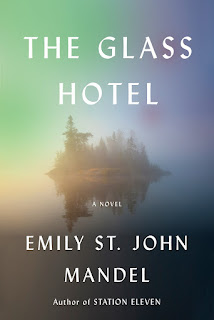 From the award-winning author of Station Eleven, a captivating novel of money, beauty, white-collar crime, ghosts, and moral compromise in which a woman disappears from a container ship off the coast of Mauritania and a massive Ponzi scheme implodes in New York, dragging countless fortunes with it.Vincent is a bartender at the Hotel Caiette, a five-star glass and cedar palace on an island in British Columbia. Jonathan Alkaitis works in finance and owns the hotel. When he passes Vincent his card with a tip, it's the beginning of their life together. That same day, Vincent's half-brother, Paul, scrawls a note on the windowed wall of the hotel: "Why don't you swallow broken glass." Leon Prevant, a shipping executive for a company called Neptune-Avramidis, sees the note from the hotel bar and is shaken to his core. Thirteen years later Vincent mysteriously disappears from the deck of a Neptune-Avramidis ship. Weaving together the lives of these characters, The Glass Hotel moves between the ship, the skyscrapers of Manhattan, and the wilderness of northern Vancouver Island, painting a breathtaking picture of greed and guilt, fantasy and delusion, art and the ghosts of our pasts.

I don't even know where to begin with this one and how to even describe what genre the story is! It's nothing like Station Eleven, which I adored, but it was a fascinating study of characters dealing with dysfunctional families, financial fraud and the alternate reality we often create in our minds to distract us from the path we did take, and what could have been....The story quite slowly so it did take me a while to get into the book as I was trying to work out the lay of the land so to speak, but once I'd got my head around the relationships and relevance of the hotel then I found it a really absorbing read and at times it reads like a glossy TV drama - I can picture it already being snapped up by a TV company!The main characters are Vincent and her brother Paul - he took the wrong path as a youngster and loses touch with this sister. After many years and a spell in rehab he gets back in touch with her and the find themselves working at a luxury hotel.... and their worlds begin to spiral in completely different directions once more.A lot of the book focuses on the financial fraud of Jonathan Alkaitis, whom Vincent is with after meeting him at the hotel, and I did find the fallout of his fraudulent behaviour to be most fascinating -the people he'd conned, how those he worked with dealt with what was facing them, and how Jonathan himself coped with his life in prison, creating a 'counterlife' in his head and avoiding reality altogether.What I did miss was more of a focus on Vincent and her life - the story goes backwards and forwards in time and gives snapshots of Vincent and this new life that she found herself living in and how she justified her existence and how that sat with her childhood experiences and relationship with her brother and his role in the story, both past and present.It really shows up the modern world for what it is - how money clouds the judgement of so many - and I did find the whole story fascinating especially seeing how all the different threads linked up towards the end in a really inventive and clever way.