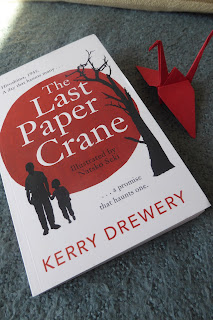 One thousand paper cranes to achieve your heart’s desire.

1945, Hiroshima: Ichiro is a teenage boy relaxing at home with his friend Hiro. Moments later there is a blinding fl ash as the horrifi c nuclear bomb is dropped. With great bravery the two boys fi nd Hiro’s fi veyear-old sister Keiko in the devastated and blasted landscape. With Hiro succumbing to his wounds, Ichiro
is now the only one who can take care of Keiko. But in the chaos Ichiro loses her when he sets off to fi nd help.

Seventy years later, the loss of Keiko and his broken promise to his dying friend are haunƟ ng the old man’s fading years. Mizuki, his grandaughter, is determined to help him. As the Japanese legend goes, if you have the patience to fold 1,000 paper cranes, you will fi nd your heart’s desire; and it turns out her grandfather has only one more origami crane to fold...

Narrated in a compelling mix of straight straight narrative,
free verse and haiku poems, this is a haunting and powerful novel of courage and survival, with full-page illustrations by Natsko Seki.

A truly stunning book! Not only in the subject matter explored but in the style it is written. Part poetry, part conventional storytelling, I found it to be both heartbreaking and full of hope. It shows the power of the kindness of others, and the toll it can take if a promise is felt it isn't kept.Set in both contemporary Japan and in Hiroshima in 1945, it follows the story of Ichiro. In the present he's an elderly man, haunted by the past and grieving the loss of his wife. The only woman who he'd shared stories with and now he feels alone and unable to cope with the pain his heart is feeling. His granddaughter, Mizuki, notices how broken he seems and just wants to help and he finally opens up and tells her of his experiences as a young man living in Hiroshima before, during and after the horrific atomic bomb was dropped.The attention to detail and the amount of research that has gone in to this book appears to be staggering. The sights, the sounds of everyday life being ripped away from everyone in Hiroshima that day and the aftermath of the survivors trying to get help, making promises to others was just heartbreaking to read about. Ichiro feels such disorientation as he tries to make sense of what he sees around him on that fateful day - just a boy of 17 having to confront such horrific sights. He finds his friend Hiro, along with his 5 year old sister and you can only begin to imagine their state of mind as they set off to try and find medical help.In the present time, the story is told in poetry form, and is simply beautiful. The bond between Mizuki and her grandfather is so strong, so her willingness to help try and heal him, to find the closure he so wanted, was so emotional and touching. It really showed the importance of hope and having someone to talk to, to share stories and thoughts.The narrative is also beautifully displayed on each page, and along with the striking illustrations it just really adds to the whole reading experience and makes it totally immersive. I had tears in my eyes by the end and I just adored every page. There's even a guide at the back to making your own paper crane, so central to the plot of the story and was a fitting addition to the whole experience.An unforgettable read! Highly recommended!!