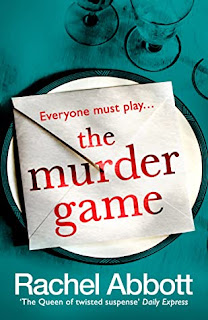 A BRAND NEW STEPHANIE KING NOVEL, FROM THE +3 MILLION COPY-BESTSELLING QUEEN OF PSYCHOLOGICAL THRILLERS
A year ago today, we all gathered for Lucas's wedding at his glorious Cornish home overlooking the sea.
But no one was married that day.
Now Lucas has invited us back to celebrate the anniversary. But the anniversary of what? The wedding that never happened, or the tragedy that occurred just hours before the ceremony was due to begin?
He's told us that tonight he has planned a game. We have our costumes, we have our parts, and everyone must play. The game, he tells us, is about to begin.
What does Lucas want from us? What are we not being told? And what's going to happen when this terrible game is over?
PUBLISHED BY WILDFIRE BOOKS
PURCHASE LINKS
Amazon
waterstones
Blackwell's

A really gripping murder mystery!! It didn't take long for me to fall under the spell of the characters and the rather strange situation they find themselves in!

A year ago they all meet up for a wedding at the home of Lucas, a very wealthy man and friend of Matt, who brings his wife Jemma along. And then things get strange! There's an uneasy feeling amongst the group with memories of the past resurfacing to cause more ripples of resentment and upset. Then a tragedy on the morning of the wedding sends shockwaves amongst them all.

So when they're invited back a year later, they are left wondering what is Lucas up to and his plan for a 'murder game' seems all the more worrying and threatens more bad feelings and unease.

Stephanie King is sent to investigate the tragedy on the day of the wedding, and is following up on another story when she stumbles across the same guests a year later - things definitely aren't adding up to her and watching her try to piece together all the pieces to see if 2 different cases have a link to the goings on a year ago was fascinating.

I really enjoyed the tension throughout this book! The story is told from a number of different of viewpoints so you really get a good insight into the different characters and threads of the story as they unfold. You really could sense the apprehension from the guests as they go back a year later, and my opinion on motives and the different personalities involved kept changing as little bits of information were released about their past behaviour. Some of the stories were quite horrific and traumatic and it all led brilliantly to a pulsating and shocking ending!
★★★★
Posted by Books and Me! at Saturday, April 18, 2020