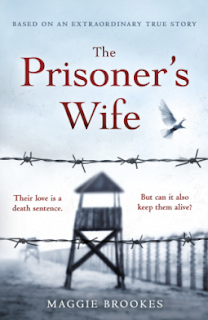 Their love is a death sentence. But can it keep them alive?
Czechoslovakia, 1944. In the dead of night, a farm girl and a British soldier creep through abandoned villages. Secretly married and on the run, Bill and Izabela are searching for Izabela’s brother and father, who are fighting for the Czech resistance. They know their luck will not last.
Captured by the German army, it seems they must be separated – but they have prepared for this moment. By cutting her hair and pretending to be mute, Izabela successfully disguises herself as a British soldier. Together, they face the terrible conditions of a POW camp, reliant on the help of their fellow POWs to maintain their fragile deception.
Their situation is beyond dangerous. If Izabela is discovered, she and Bill – and all the men who helped them – will face lethal consequences.
_______________________________________
A debut novel set in war-torn Czechoslovakia amid the extreme privations of a prisoner of war camp. Based on a true story, passion, heroism and a love that transcends overwhelming odds.

'A deeply moving and compelling read, The Prisoner's Wife tells of an epic journey, not only across war-torn countries but deep into the heart of what it is to be human. Beautifully written ... a heart-rending story beautifully told.’ JUDITH ALLNAT, author of The Poet’s Wife and The Silk Factory

This is a book based on a true story told to the author, and it really captures the extraordinary times many lived through during the Second World War and goes to show that sometimes fact can be stranger than fiction.It centres around Izabela, a Czech girl living on a farm with her mother and younger brother, and how her world is changed when the Germans bring some prisoners of war to the farm to help with the workload. She is immediately smitten with Billy, an English POW, and their romance moves at a very fast pace and they soon find themselves married and on the run. A decision that leads them to the horrific consequence of being captured and having to spend time as prisoners of war.Izzy is disguised as a man throughout and it was fascinating to see how she fared, how she was treated by the other prisoners, and how they all become a surrogate family to one another to get through the daily terror that they all faced. Never knowing who else to trust, how the german guards would treat them and what work they had to do. Life is extremely tough, but the kindness of others around them makes each day a little easier to face.This book never gets too graphic which makes it much easier to read, but it still does a sterling job of conveying the conditions that they faced, and how the human spirit can cope when faced with such adversity. The devotion showed by Izzy and Bill to each other was so touching, and as the story goes on the days get darker for them with what they're facing. And with very little knowledge of what is going on in the bigger picture of the War, they just have to keep finding it within themselves to keep going - having to deal with hunger, horrific sights they witness - a real story of triumph over adversity.This was a story that made an afternoon fly by and was an absorbing story.