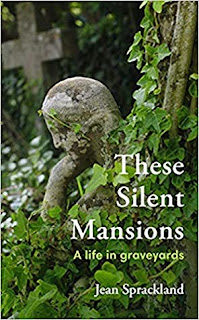 Graveyards are oases: places of escape, of peace and reflection. Each is a garden or nature reserve, but also a site of commemoration, where the past is close enough to touch: a liminal place, at the border of the living world.

Jean Sprackland’s prize-winning book, Strands, brought to life the histories of objects found on a beach. These Silent Mansions is also an uncovering of individual stories: vivid, touching and intimately told. Sprackland travels back through her own life, revisiting graveyards in the ordinary towns and cities she has called home, seeking out others who lived, died and are remembered or forgotten there. With her poet’s eye, she makes chance discoveries among the stones and inscriptions: a notorious smuggler tucked up in a sleepy churchyard; ancient coins unearthed on a secret burial ground; a slow-worm basking in the sun.

These Silent Mansions is an elegant, exhilarating meditation on the relationship between the living and the dead, the nature of time and loss, and how – in this restless, accelerated world – we can connect the here with the elsewhere, the present with the past.

This was a beautifully written and fascinating insight into the world of the graveyards. From the broken tombstones, to the wildlife inhabiting the grounds late at night, I found myself totally absorbed in the journey of the author as she revisits graveyards near to where she has lived and the memories it brought back for her, alongside the history she uncovers about 'residents' and the stories and times they lived through.I've always been fascinated by graveyards and find myself drawn to them wherever I go, and the same goes for Jean Sprackland so as she looks back over her life she decides to go on a little adventure to revisit old houses she has lived in. It gives a lovely insight into her life and as she has a wonderful way with words, it was just a pleasure to read! I found comfort in her prose, as I find comfort and peace in graveyards.There's plenty about the wildlife and nature that is often found at these sites,the changes to the churches and the areas they are in but what was most fascinating was the names that caught her eye on some tombstones, and as she delved further into their history it was their stories coming to life that were so illuminating and made them 'real'! They weren't just names to be forgotten and covered over by moss and lychen.She also looks at how different generations dealt with death, along with the perceptions and way funerals are held, with the prominence of cremations and now the surge in natural funerals being more eco-friendly. I learnt so much throughout this book as she has such an accessible manner and each chapter was well crafted and a delight to read.