#BookReview WHEN HE FINDS YOU by SADIE RYAN 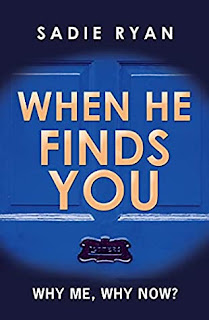 “Her life was in danger and she didn’t know it. He felt a thrill just knowing that simple thing …”Gemma’s business is on the brink of collapse, and there’s a real chance that she and her husband could lose everything they’ve worked so hard for.So when a stranger offers financial help, Gemma ignores the red flags and accepts out of desperation. The condition? Just companionship – that’s all the stranger wants. Surely a small price to pay to get her life back?But when things seem too good to be true, it’s often because they are – and soon Gemma finds herself being dragged so far into a twisted, dangerous world that she might never surface again …

Another pulsating read from Sadie Ryan! One of those stories that has you gasping with shock over certain decisions by characters, and then wondering just what you would do in the situation they find themselves in!!Gemma and her husband find themselves in dire straits - their accountant has done a bunk with all their money, and the HMRC are circling for money owed and they face losing everything that they've worked so hard for. The only way Gemma is coping is with the help of a glass of wine or two - anything to try and make the problems go away. If only it was that easy.....When a stranger then offers her a solution to all her problems, she wonders what the catch is! As did I! But he says no strings attached, just companionship. Desperate times often call for desperate measures!What follows is the struggle she faces keeping up the charade with her husband, who clearly wants to help but she doesn't want him dragged down any further, while dealing with Jake - is he a knight in shining armour, or does he really have an ulterior motive?I loved the twists and turns along the way with this story! The story delves into her past which portrays her in a different light and it's full on psychological warfare with some dark twisted minds being exposed! The tension really builds nicely and I had to hold my breath a couple of times it got so edgy!! It's dark and often unsettling - more please!!