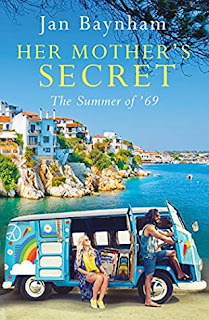 Delighted to be sharing this guest post written by JAN BAYNHAM today to celebrate publication day for HER MOTHER'S SECRET!! She has written background to the setting and the novel itself, and how it feels having your debut novel published!!  Happy Publication Day Jan!


A sixties’ saga set on a Greek island: Her Mother’s Secret by Jan Baynham

Her Mother’s Secret with its sub-heading of ‘the Summer of ‘69’ is my debut novel. It mainly takes place on a fictional island in southern Greece. In 1969, Elin Morgan leaves Wales after finishing art college to spend the summer months studying at a painting school in Greece. She records everything in her diary but, while there, something happens that causes her to never paint again. The secrets of that summer remain with her until her untimely death twenty-two years later. Always fascinated by family secrets, I wanted to explore the reasons why someone would keep a part of her life so deeply hidden from those closest to her. But maybe Elin had a conscience after all when she bequeaths her diary to her daughter, Alexandra. Through reading the diary, Alexandra discovers she didn’t fully know her mother as she thought and is shocked as the secrets from her past are revealed. I tried to put myself in Alexandra’s shoes. Having had a very close relationship with her mother, how must she have felt finding out that her mother had kept such secrets from her? Alexandra travels to Greece to find out the truth and what really happened in that summer of 1969. Will she understand why her mother closed down that part of her life?

Why did I set the story in Greece? Having had several holidays there now, I first visited the country in the seventies when we stayed with my aunt and Greek uncle. I fell in love with the climate, the vibrancy of the colours of the sea and flowers and the warmth of its people. It seemed to be an ideal place for a young artist to spend her summer. In 1991, Alexandra thought so, too, when she first arrived in the picturesque harbour of Péfka: ‘No wonder you loved it here, Mam. The colours alone make it an artist’s heaven.’

I enjoyed getting to know my Greek characters, some named after or based on people I’ve met and observed on visits over the years. Dimitra, the host at the taverna where Elin stays, is named after a lovely waitress from the hotel we go to in Crete. On a trip to a Cretan village, I watched a woodturner working at his lathe on pieces of olive wood and he became the inspiration for Yiannis who figures largely in Alexandra’s story. Vassilis is named after an elderly Greek man who led me onto a taverna dance floor and tried to teach me traditional dancing with little success! He appears in both Elin’s and Alexandra’s story. I hope I’ve done justice to the country and its people by giving the reader a glimpse of life on the island.

Having my first novel published is both exciting and slightly nerve wracking. I’ve loved writing Elin’s and Alexandra’s stories and hope that readers will enjoy them too. 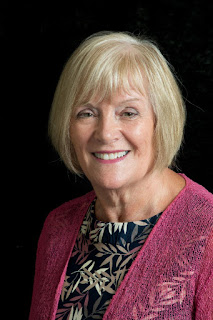 After retiring from a career in teaching and advisory education, Jan joined a small writing group in a local library where she wrote her first piece of fiction. From then on, she was hooked! She soon went on to take a writing class at the local university and began to submit short stories for publication to a wider audience. Her stories and flash fiction pieces have been longlisted and shortlisted in competitions and several appear in anthologies both online and in print. In October 2019, her first collection of stories was published. Her stories started getting longer and longer so that, following a novel writing course, she began to write her first full-length novel. She loves being able to explore her characters in further depth and delve into their stories.

Originally from mid-Wales, Jan lives in Cardiff with her husband. Having joined the Romantic Novelists Association in 2016, she values the friendship and support from other members and
regularly attends conferences, workshops, talks and get togethers. She is co-organiser of her local RNA Chapter.


You may find out more about Jan here:


It’s 1969 and free-spirited artist Elin Morgan has left Wales for a sun-drenched Greek island. As she makes new friends and enjoys the laidback lifestyle, she writes all about it in her diary. But Elin’s carefree summer of love doesn’t last long, and her island experience ultimately leaves her with a shocking secret …

Twenty-two years later, Elin’s daughter Alexandra has inherited the diary and is reeling from its revelations. The discovery compels Alexandra to make her own journey to the same island, following in her mother’s footsteps. Once there, she sets about uncovering what really happened to Elin in that summer of ’69.