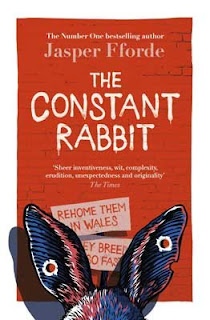 Peter Knox lives quietly in one of those small country villages that's up for the Village Garden of the Year award. Until Doc and Constance Rabbit move in next door, upsetting the locals (many of them members of governing political party United Kingdom Against Rabbit Population), complicating Peter's job as a Rabbit Spotter, and forcing him to take a stand, moving from unconscious leporiphobe to active supporter of the UK's amiable and peaceful population of anthropomorphised rabbits

A satirical book about adult sized rabbits?! Yes please! And it didn't disappoint as Jasper Fforde writes in a way that only he can, throwing our human world and all its' issues under the bus, so to speak, to shed light on the prejudices and nimbyisms that affect us all!50 years ago The Event happened, where 18 rabbits became semi human, and now there are 1.2 million of them as they have been breeding, well, like rabbits! This has upset many of the 'human' population and the rise of the UK Anti Rabbit Party ( I can't think WHO they are based on!) means that life for the rabbit population is unpleasant.The story is told through the eyes of Peter Knox, a human rabbit spotter, who just wants to get on with everyone in the small community he lives in. When new neighbours arrive, Doc and Constance Rabbit, the majority of the locals do all they can to get them to move on, forcing Peter to take a stand and become a prominent supporter of the rabbits who just want to live their lives peacefully.There is so much humour in this book that I often found myself chuckling at the absurdities and similarities to the world we live in! Even the library cuts in our world are mentioned wonderfully in this book as the locals find themselves just having 6 minutes to borrow books due to the cuts in staff! There's so many subtle digs at society that it was fun to see what would be mentioned next! There are rules for rabbits to live by, the issues facing humans and rabbits which are mostly the same and the discriminations facing them as they go about their business.I have to say it did take a while for me to get in the flow with this story, as others have said in their reviews, but when it clicks it just becomes a fun, sarcasting and cutting read - the footnotes are always a joy to read and add even more humour to the proceedings!