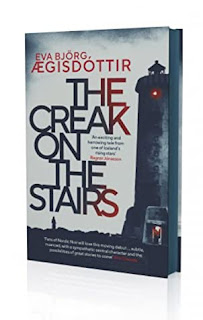 When a body of a woman is discovered at a lighthouse in the Icelandic town of Akranes, it soon becomes clear that she’s no stranger to the area.Chief Investigating Officer Elma, who has returned to Akranes following a failed relationship, and her collegues Sævar and Hörður, commence an uneasy investigation, which uncovers a shocking secret in the dead woman’s past that continues to reverberate in the present day …But as Elma and her team make a series of discoveries, they bring to light a host of long-hidden crimes that shake the entire community. Sifting through the rubble of the townspeople’s shattered memories, they have to dodge increasingly serious threats, and find justice … before it’s too late.

Wow! What a way to get a new crime series started off! I loved it so am already eagerly awaiting more from this series!The mystery of the woman found dead by a ligthhouse - not the cheeriest subject to investigate, but for Elma who has recently moved back to the area after a split, it's a case to sink her teeth into and she soon finds it is taking her to some very dark places and questioning motives and uncovering disturbing secrets about the past lives of the inhabitants of Akranes.With the death of Elisabet throwing up more questions than answers, this book does a brilliant job of exploring the past of Elisbet, with flashbacks to 1989 when she was a small child growing up in the bleakest of households, whilst Elma is left to put the pieces together of the little information they do have on a woman who was very secretive, didn't appear to have many friends and was always seen as odd and pitied because of her childhood.I loved the character of Elma as she was obviously hurting from her previous relationship, so having to move home was the last thing she wanted to do, especially with certain memories that it brings back. And memories play a big part in this story as many of the characters with a link to Elisabet are often trying not to remember the past as it appears that things were not all as it seems behind closed doors.The story of young Elisabet was heartbreaking and tragic. With the lookbacks to the past and what she faced as just a young child was harrowing, and the fact that there seemed to be nobody there to look out for her made it more shocking.This was a quietly unsettling and dark story that had me totally engrossed from the start and I highly recommend it!!