#BookReview THE MATING OF STAGS by RAY ROBINSON 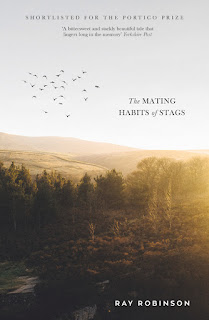 Midwinter. As former farmhand Jake, a widower in his seventies, wanders the beautiful, austere moors of North Yorkshire trying to evade capture, we learn of the events of his past: the wife he loved and lost, their child he knows cannot be his, and the deep-seated need for revenge that manifests itself in a moment of violence. On the coast, Jake’s friend, Sheila, receives the devastating news. The aftermath of Jake’s actions, and what it brings to the surface, will change her life forever. But how will she react when he turns up at her door? As beauty and tenderness blend with violence, this story transports us to a different world, subtly exploring love and loss in a language that both bruises and heals.

this was a stark, often despairing but beautifully written story exploring the thoughts of grief and loneliness as we follow Jake on the run - not normal for a man in his seventies, but as his story unfolds we see the moments that lead to this and it is such a powerful exploration of how humans deal with situations they find themselves in, and how they and the people closest to them deal with the consequences.Jake is a man missing his wife, Edith. But he finds friendship with Sheila and they find comfort in each others company as Sheila is dealing with her own family issues and disappointments, so when Jake goes on the run she is left contemplating their friendship and waiting to hear from him.And while Jake is on the run, finding new places to hide and hoping his actions don't catch up with him, we get flashbacks of his life - his marriage to Edith is the main feature - and he's left alone with his memories both good and bad which isn't always the best for his mental state.I loved the difference in the two characters in the lives they had lead but how they were drawn to one another and how they just clicked. At only 220 pages long, this is a book that has a powerful impact on you as a reader as the characters are written with such clarity and full of flaws, but those make the characters easier to relate to. We've all been disappointed by people in our lives, as have Jack and Sheila, and it's that impact on how their lives turn out because of the actions of others that we are witnessing throughout this story. Their reactions, their anger, frustrations - laid bare for us all to see.It's one of those books that is gripping, unsettling, heartbreaking and intense and I loved every single blooming page of it! Highly recommended!!