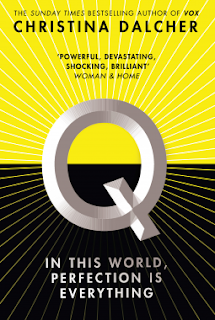 Elena Fairchild is a teacher at one of the state’s new elite schools. Her daughters are exactly like her: beautiful, ambitious, and perfect. A good thing, since the recent mandate that’s swept the country is all about perfection.
Now everyone must undergo routine tests for their quotient, Q, and any children who don’t measure up are placed into new government schools. Instead, teachers can focus on the gifted.
Elena tells herself it’s not about eugenics, not really, but when one of her daughters scores lower than expected and is taken away, she intentionally fails her own test to go with her.
But what Elena discovers is far more terrifying than she ever imagined…

This is a horrifying but totally engrossing glimpse into a world that doesn't seem too far away - which is what makes it even more terrifying! We are used to being judged on how we look, what products we have etc in our world, but here you are tested to see your quotient, Q, and that will determine the school you go to - either one that nurtures you and encourages the gifted members of society, or sent off away from you family to a school, more like an institution, that is run by the government.Elena Fairchild is living a blessed life - teaching at one of the elite schools, married to Malcolm who is working for the government behind the scenes, and mother to 2 daughters. They see those who haven't 'succeeded' in life but the way that life is run it is best not to think too much about them. If you have a higher Q it allows you a life of privilege such as extra items at the supermarkets, different queues at the tills, even the school buses are different for children with higher and lower Q's. In this world, even illness requires verification so no playing poorly for a day off work!But her world is about to change when one of her daughters scores low in her Q test and she sees the other side of the coin - and she doesn't like it. You'd think she'd get support from her husband to try and save their daughter from being sent away, but you'd be wrong! And her life starts unravelling as she looks back at different points in her life and starts to regret certain decisions she made that have led to this moment.The more that Elena looks into the whole system on which their lives are based, the more she is horrified and desperate to find a way out of it all. You really can sense her devotion to her daughter and imagine yourself in that situation, battling both your other half and the society you live in. goThis is a scary glimpse of a future reality and I loved how real it all felt!! The despair shown by Elena, the harshness of her husband as he towed the government line, and the uncovering of the true reality of the institutions was truly shocking!! A brilliant read!!